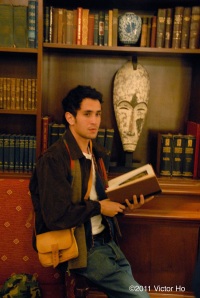 Lima, Peru. We had just had the last supper with David. In the restaurant our mood was good humored and we all made guinea pig faces. Maybe, I’ll post these pictures later. His mother and I would not see him again for about a year. And his sister, well, that’s another story entirely. In the meantime he would survive long grueling bus rides and at least two robberies. What an adventure he had making his way through many South American countries, finding his way alone, and growing up on life’s experiences. Here, just before we parted, David posed in the Mira Flores Park Hotel lobby. He looked confident and ready for his big adventure. No one, neither his mother nor David showed any of the concerns that they would later admit feeling. It turns out no one wanted to admit they were terrified of his leaving and his striking out on an unknown adventure. The only thing that I can say is, “Thank goodness for the internet and Skype!” And when David called home explaining that the youth hostel owner had given him a free phone call home, his mother inquired, “Are you in jail?”

This entry was posted on September 24, 2011 by Victor Ho. It was filed under All, People, Peru and was tagged with People, Peru.