Part 2: There were so many photo ops, you didn’t know where to turn your camera. (See also my other blog Imaged Event for more images.) So maybe it wasn’t so many people? The estimate on the website is about 60, 000 marchers. It literally took about two hours to get everyone onto the parade route. The director Jeanne Fleming says that she sees the parade through the eyes of the photographers who are there to record the event. Indeed, one person can’t be everywhere and the number of people moving and the size of the geographic space makes it impossible to even get a fraction of the parade and the costumes. There are many photos that get repeated. Some parade attendees wear the same costume each year. Some folks come early and are a photographic subject for all the photographers who otherwise would not have a subject. These early arrivals get a lot of attention. It’s chaotic. And, I guess it’s a little claustrophobic. But when you’re seeking out the next costume, the weather, the chill, the crowd and the noise are not too much of a deterrent. The parade organizers put the wedding party in front. Bringing up the rear, Occupy Wall St got a big crowd into the parade. It seems that they may have been making a statement again, but I’m not sure. Most photos don’t require explanation. But, there was this male nun dressed in lace women’s underwear…. The theme was ‘I’ of the beholder, hence, all the eyeballs.

Rev Yolanda and Rev Glen were married in the midst of preparations for the Greenwich Village Halloween Parade. The location was the triangle below Spring St. With all the people in the assembly area it was hard to distinguish between guests and curious onlookers. After the ceremony the happy couple was at the front of the parade in a horse drawn carriage. Congratulations to the both of you. For me, it was another unexpected wedding encounter. (More at Imaged Event) 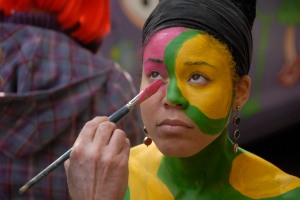 I break down Halloween in parts because there were so many images. This post is mature for some folks. My other blog Imaged Events is definitely more detailed. Be warned. An artist named Andy Golub is a tradition at the parade. According to every other photographer, man and woman, they all recall this scene during the preparations for each parade. Photographers and spectators gather around with every manner of recording device, from camera to iphone to ipad. The girls are mostly different every year. They march in the parade, chill, warm up in the escort car, and emerge again to hand out promotional material. Each girl is body painted as artwork. The process takes time. Several photographers are officially designated to document the event. It’s weird, funky, and very New York. Yes, it’s perfectly legal according to local law. Mr Galub has done work in Times Square as well. His models have linked up with the Naked Cowboy (he’s in the Hurricane Irene post in my other blog) another Times Square icon.

So, when I arrived I did not realize that the girl in the colored T shirt standing in the middle of 6th Avenue between the traffic light change was body painted. But before you know it I had followed her and watched the fascinating process unfold. Many of these images were shot before the artwork was complete and the anatomy not so obvious any longer.

Technical: For the daylight shots, there was really no problem. The late afternoon sun gave some excellent light and shadow. As the light progressed to evening I had the ISO on my camera set to auto and the ISO got upward to 1600. 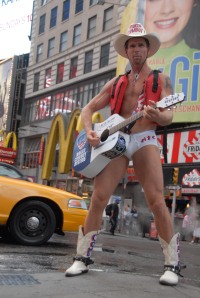 Times Square, New York. There has been a man, tourist attraction of sorts, tolerated by the local authorities, who acts as a goodwill ambassador for tourists who seek a quintessential NY souvenir. All it costs is a tip to have your photo taken with the Naked Cowboy. I have seen him in a driving snowstorm letting winter clad women hug him as they pose beside him. Chilling, but true! He’s changed. The original, I assume so, because he had been the only one that I knew, is gone and new Naked Cowboy stands in Times Square. Not really naked of course, because how else could he advertise except on his BVD”s. Maybe the original cowboy sold him the franchise? So, Hurricane Irene, there he is in Times Square doing his business as usual. And the tourists are loving it. I’m not sure if he actually plays, or knows how to play the guitar. It’s a convenient prop to collect the tips. Where else?

Technical: I like this photo for the low level of view. I set up in wide angle and hold the camera about 6” to 1 foot off the ground pointed upward. You may have to try a couple of times. But, hey, it’s digital. The angle on the image, non-level horizon, sometimes also, makes the image more dynamic.

The Village Halloween Parade. The parade has long since surpassed the narrow streets of Greenwich Village. It starts in Soho and  is conducted up 6th Avenue. I don’t know exactly how many people attend. But it is easily a  million. The avenue is lined with spectators six deep from Canal Street to 16th Street. There are as many marching participants as want to come down and get into the action. About as many people are along the sidelines and spill over into Greenwich Village. In fact some of the more interesting costumes have been on the side streets. I got there early this year. Finally! The girl in the picture is half naked and getting body painted. It’s a tradition, I guess. The group that organizes this seems to have new girls each year who submit to the arduous process of being painted in front of horde of photographers. It was chilly but not bitter cold like last year. Even so the girls were pretty chilled anyway. Well, what do you do to make a pretty half naked girl smile. Try this guy. He wandered onto the block with blood dripping and with a New York attitude. Yeah, she laughed. I just went over the images on a first pass to edit. There were 1659. I will whittle the number down to a more manageable few and then post more images here and on my other blog which was set up to do galleries. How did I pick this image? Just randomly, because there were so many and I usually don’t have a signature image with so many choices.

About half the images were shot with flash. My secret is to use a Quantum rechargeable battery. It recycles quickly so there’s no lag. And I ran up the ISO to 320 this year in order to extend the battery life. I didn’t trust the system so I bought along another battery and flash just in case. I could try off camera flash or a diffuser but it’s Halloween and the images with direct flash have an edgy feeling. And, that’s what it’s about.

At Photo Plus Expo recently held in New York, I accompanied my cousin to a studio set up to demonstrate cameras and lighting off site. It was in a warehouse loft space. There were still life, product, and models on hand to demonstrate technique and equipment. I felt like I was party to a professional shoot and peering over the shoulder of the photographer. I don’t have the space for the lighting involved but it was fun. I let my slow shutter speed blur the hair moving from the fan. And note the negative space, another element of design. Using negative space is a new composition element for me.