Up In A Hot Air Balloon 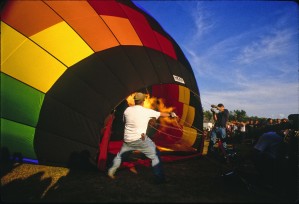 I discuss hot balloons in my other post. (see Blog Roll: ImagedEvent)

I respond in this post to a comment about dangers of flying in a helicopter. The story expands in the gallery of my other blog. The primary slide in this sequence is the early preparation. Balloons have to be filled with some very hot gas. Fortunately I have not seen any accidents. Then you go up into the air with no way to steer except by the direction and whim of the prevailing winds. The launch is determined by the winds, which really can’t be much more than a breeze, less than 10mph. Otherwise there is danger in flight control and landing problems. What comes to mind in the second photo is Dorothy in the ‘Wizard of Oz.’ After the balloon goes up….

The happy group included my wife, who has definite views on safety and risk. Her good buddy Maryanne who has a sense of misplaced innocence and a risk taker herself, probably encouraged Lisa. Bob and Kathy splurged and went as an anniversary present to themselves. Kevin went along out of his sense of adventure. Alex and Susan, spouses to the brave aviators stayed grounded. I have been in a helicopter and didn’t think that I could top that experience.

The process starts when there are favorable wind conditions. The winds in early morning and late afternoon are the most calm. Once the balloon goes up, the balloon team and chase cars scramble staying in communication with the balloon. The roads and a good map are crucial as the madcap chase over hill and dale tries to keep the balloon in sight.

When the decision to land is made, the pilot searches for a likely spot and then dumps altitude. In this case there were many balloons up in the air but landing is ‘every man for himself.’ As the balloon got closer to the ground the pilot clipped off the top 6 feet of a pine tree to slow the basket. Lisa, ever cautious, cried out in alarm. She was admonished to keep quiet, as the pilot did not want the police or the farmer to be alerted to the planned landing maneuver.

Once they were on the ground, the field had rats, and there was horseshit. So the pilot and crew enlisted the balloon passengers and even the chase team (that would be me, who had no pony in this race) to keep the balloon from touching the ground and being soiled.

Afterward, the whole group returned to the launch site and we toasted the experience with champagne. In the course of the conversation, I innocently asked about pilot qualification to operate a balloon. There is no FAA here. If you have the money to purchase a balloon, you are the pilot/owner. Our pilot admitted, that early on, the flammable gas burned his co-pilot who promptly fell out of the basket. A chase ensued to retrieve the empty basket that included commandeering a vehicle to assist the team. Yeah, that’s why there is an oversight body called the FAA. As far as pilot experience, if you don’t ask…