Hi Victor.  Your blog reminded me of this picture.  I’ve attached it and hope you can get it.  My friend Greg worked at the Bronx Zoo for a few years and he worked with the silverbacks.  After being gone for 5 years he returned to take his daughter to the zoo.  At the exhibition she stood by the glass to see the gorillas.  One of the silverbacks, Julia no less,  recognized him and came to the glass to see him.  I love this shot because it looks like both his girls are standing together looking at him.
Hope this works.
Vicki
What a story! I never thought that there could be such a connection. Six degrees of separation. 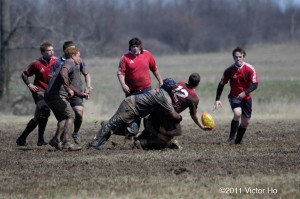 ‘Mudders,’ that’s how I would describe dedicated rugby players. It’s not a popular sport in the USA. But else where, there is quite a world following. The recent Rugby World Cup concluded in New Zealand. My daughter and some of her friends would catch some of the matches in the late evening hours. If I didn’t mention before, Julia was captain of her college team. Anyway, it seems that there is nothing ‘prissy’ about rugby. If you are down and dirty, you were playing it right. I attended a gathering of college teams in Batavia, NY. That is halfway to nowhere but close enough to Niagara falls to wish that I had gone there as well. The picture was taken on a frigid spring day.