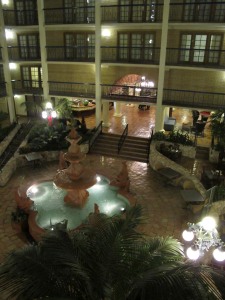 I’ve traveled through many hotels. Mostly I don’t pay attention. The lobbies are pretty standard. With advancing age and the thought of post concussion memory loss on my mind, I was momentarily stopped by déjà vu the other evening. I had been in this hotel lobby before but not in this town. I was in San Antonio on business. The lobby was a dead ringer for one that I had been in before, just not San Antonio. I have been in this city once before but not in this hotel. I have watched my share of science fiction movies. After a moment my memory was jogged. The fountain was the same. But the other hotel had turtles in the fountain. Sure that I was not demented, I realized that though I don’t remember the name, I must have stayed in another location of this hotel chain. I still have to say that it was disconcerting.

This entry was posted on January 14, 2012 by Victor Ho. It was filed under Travel and was tagged with Travel.