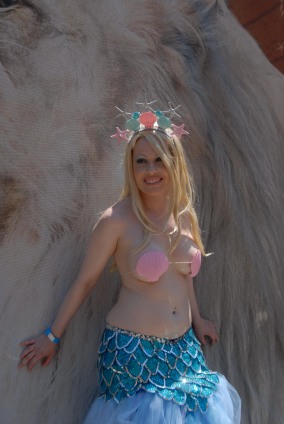 In spite of a cool spring, summer and the annual mermaid parade is not too far off. There is a certain order of things at parades in New York. Photographers show up early to catch their candid shots of the participants before the parade. The staging area is a frenzy. At the beginning there are many more photographers than participants. If you are canny, you show up early and make it into everyone’s photo collection. It also helps to have a good costume. This young mermaid was just tastefully covered enough to be noticed. Ok, she was fairly mobbed. I hope she was wearing sun tan lotion. Her fair complexion was about to be baked in the hot summer sun. Among the first to arrive she had everyone’s attention for a good long time.