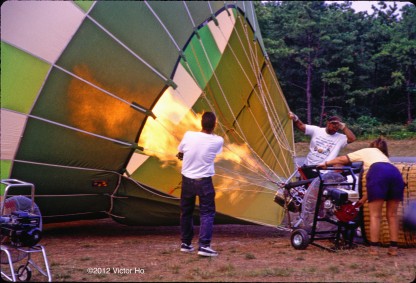 I’ve shot hot air balloons before. This was one of my first encounters. Lisa had seen an advertisement for the Long Island balloon festival air show and we drove to  Brookhaven Airport with the kids. Several days earlier Lisa had been exposed to poison ivy in her gardening. She had never been affected before. But now she had weeping skin lesions on her arms and was quite distressed by the itching. She had covered her arms in moist gauze. The lesions were popping out in places she had not been exposed, such as her belly. Ever the good mom, we arrived at the airport. Seeing the balloons was cool. We had to wait around until sunset for the launching. At the time I was not yet aware that balloons launched at sunrise and sunset when the winds were most favorable. Catching the inflation with hot gas now filling the balloon is one of the most dangerous times. There are no rules so the teams allow photographers/spectators to get up close. As I said it’s dramatic. But the real memory was the heroic effort by Lisa to wait with the kids and myself until sunset. The poison ivy was really itching and uncomfortable. We departed with the crowd leaving the airport. As we passed an empty barrel of ice water that had held soda earlier, Lisa plunged her arms into the ice up to her elbows to get relief. I did not get that picture, but the memory is still vivid.