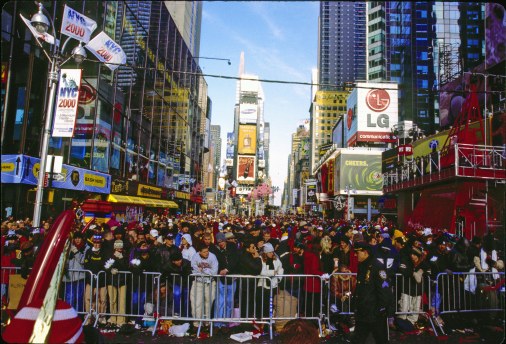 The millennium, century, decade, year… 2000. Well, that’s something I can say that I saw. We were out on Long Island and drove home in the afternoon, New Year’s eve. With all the hype about the computers and so forth, my wife wanted to be home rather than anywhere else. Ok, so I took the kids over to Times Square to see what was doing. I would never do this later in the evening. The crowd had been celebrating every hour as the New Year came in every time zone around the globe. Times Square was crowded but would become completely packed later. I’m not claustrophobic, but the evening crowd would be big. This view is north and the Coke sign is still there. The kids and I were able to walk around with relative ease. Oh, there was quite a crowd already. But people had not yet jockeyed for prime positions. I just wanted to be there in the center of the media universe and so that the kids could say they were there at the millennium.