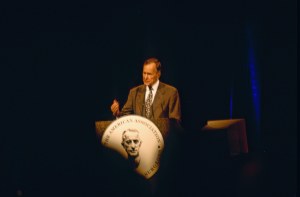 This is the first President Bush when he addressed our national meeting in New Orleans. Have you wondered what out of office presidents do? They get a lot of money to speak… a lot. We had Gorbachov in the fall of 2004. The auditorium was packed and waiting when a member of the national neurosurgical leadership stood up. I thought he would announce the speaker. Instead he stated, “In the upcoming election Kerry and Edwards are against malpractice reform. Bush (Jr) will sign it.” End of statement and he sat down. Son of a gun, if that wasn’t a political endorsement! Bush Sr spoke some years before to our group. I guess you would have to be blind not to realize that the leadership is decidedly Republican. I’m agnostic but mostly not Republican. When George spoke, it was quite an experience. He spoke for an hour. It turned out to be a history lesson. He once spoke about how before he was president there was a Berlin Wall and after he became president there was no wall… as if he took down the wall himself. (See how this ties in with Gorbachov?) This speech he gave to our meeting was much the same. It was a rehash of his presidency. And at the 59th minute of his speech he remembered to say something relevant to neurosurgery. He said that he was planning to parachute jump from a plane and Barbara warned him that it wouldn’t be a good idea in a room full of neurosurgeons. Let’s hope he didn’t land on his head. For all the money he was paid you would at least have hoped for an original speech or even a new idea. And as for the rest, I don’t remember another word he said, it was so irrelevant.