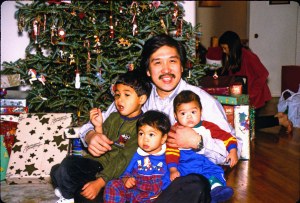 Lest I forget, it’s John’s birthday today. It’s tough at this time of the year. You have nothing to look forward to when you celebrate Xmas and a birthday so close together. He never complained. I have this theory on how my mother named her three sons. She told me she used a baby name book. She got down to the V’s and I think she panicked. What happens if you don’t find anything and now you have X,Y Z to pick from. So I got named Victor. And when the youngest was born, mom picked Eric. See my logical thinking  works. She wasn’t going back down to the end of the alphabet again. For the record mom didn’t pick out a middle name for me either. She stuck in the letter “T’ on my birth certificate and later told me she thought of my middle name. Oh, and it wasn’t till much later than that when I found out she lied about her age on my birth certificate. This story came to me from my mother’s younger sister, Fu Ching. Emily, the oldest of the three sisters, told my mother she was old when I was born. So she advised my mother to change her age. It’s too late now to find out the truth in all of this. So, to John, I didn’t forget.