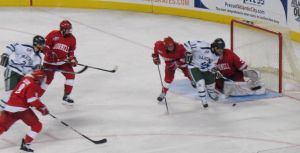 As I said, I am a photo opportunist. My friend Alex suggested that we go to the ECAC Hockey Championship in Atlantic City a few years back. He’s a fan. I’m casual, as in I would not go unless otherwise asked to attend to support a friend’s interest. I tried to bring in my big old 80-400mm camera lens and was turned away at the entry. So I shot three days with a point and shoot. There are issues. First you can’t zoom nearly close enough. And then there is the issue of shutter lag. You press the button and a moment later the image is captured. Hockey is otherwise pretty straightforward. They move up and down the ice. You can’t get anything decent when the action is at the other end. And then the object of the game is have the puck in photograph at a critical moment, such as when you are about to score. Lighting is poor and shutter speed is usually going to be too slow. With all of that you still get a few shots. In this case it wasn’t Alex’s team (Yale). But hey, he liked to watch the whole series and I was challenged to get that puck in the shot.