Family at the Wedding 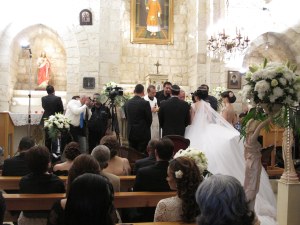 I have already been informed that if I try this trick at my daughter’s wedding, I be killed instantly. And I have no doubt that is what will happen. So, there’s a million people all around the bride at the altar. The wedding party was probably kept small to accommodate videography and photography. Really, don’t they know it messes up your background to have those tacky photovests with your company name in just about every photo. One of the videographers kept exhorting the bride’s maid to smile for the video. I expected him to start interviewing her right there at the altar.

About halfway through the ceremony the guy in the white shirt just ambles up to the left of the altar and starts firing away. He pushed the paid photographers out of the way. Another [presumably family] man had already been clicking away from that side. Just come on up, everyone’s welcome.

It was interesting in that the video light was bright enough to shoot without flash. But the photographers were happily flashing everyone in sight. And the priests [two, count ’em, two] were conducting a ceremony completely nonplussed.

And did I happen to mention the ‘dress?’ It was so large. We arrived late, so I missed the entrance of the wedding party. The dress was draped over the back of chair so the bride could sit at the appropriate times during the ceremony. As large as it was, I was fooled into thinking it was a table or an animal next to the party at the altar. Or maybe [just for a moment] the groom was marrying two women. No, that would never happen. That’s a lot of lace for one use and one wear.

This entry was posted on April 16, 2013 by Victor Ho. It was filed under People and was tagged with Beirut, Lebanon, People, Wedding.