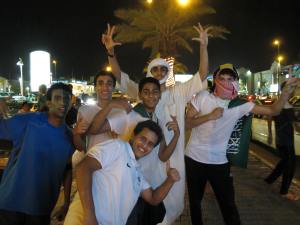 When I say there were a lot of cars, let’s see… eight lanes, bumper to bumper, at least two miles… that’s a lot of cars and a lot of heat. The police were out with flashing lights, but what could a few cops do? There were roving bands of young teens, who made me a bit nervous. Mostly they were friendly enough. There is a median separating the eight lanes and folks were gathered on it, standing around or walking up and down. For some reason, the police chased everyone away from the median.

And they chased down this group. One was apparently impersonating the king and giving an interview… a spoof. The police made it clear that this was not within the ‘rules.’