I paraphrase Shorty’s (Short Round – Indiana Jones, Temple of Doom) words with emphasis. The stinging did feel like life and death for a moment.

This picture looks worse than it felt. I will admit that it scared the “.…” out of me. I’ve told you the rule about not touching anything under the sea. Everything is setup to do some nasty thing if you are careless. The image here is the aftermath of inadvertently touching a sea urchin. Honest! I didn’t mean to do it. After all the first lesson applies. Don’t touch nothin’!!

My first lesson was with fire coral. Here’s a neat image. A baby “giant” clam is unexpectedly nestled here. 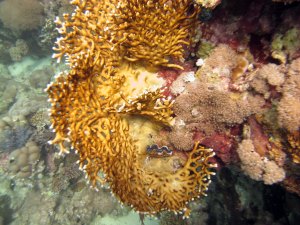 I inadvertently brushed up against a fire coral once while I was doing the decompression stop. In my mind fire coral was red in color. Nope! As soon as I touched this my wrist started to blister. I mean right there underwater I could see blisters like a second degree burn. By the time I was out of the water minutes later the blisters were gone. Hmmm! But then I had the worst itching rash there for several weeks. If I look I can still see the scar. So yes!!! I know not to touch stuff.

This leads to the circumstances of my mistake. We were on a night dive. (I love night dives. There’s different things you see at night and I like that.)

The dive master stabbed a porcupine puffer fish with his big long flashlight. He trapped it and it blew up. Wow! I was impressed and wanted to get that ‘special’ image. There are only so many things you can do (two hands!). 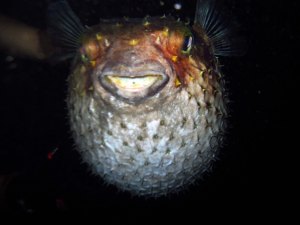 I had my light in the left hand and my camera in the right. I dropped my light and put my hand down to steady myself for the shot. Immediately I felt the sting of my mistake. I hadn’t looked. And right through my glove I got the sting of a red sea urchin around twelve or so stinging spines. They are barbed and have venom. To make matters worse, no glove on the right hand, it’s dark, and I can’t really see well without glasses underwater. The marks up my thumb came as I tried to extract the stingers and remove my glove.

Luckily it was a red sea urchin that I encountered. Armand, another diver, told me that the gray ones are even more vicious and that he suffered for weeks when he touched one of them. 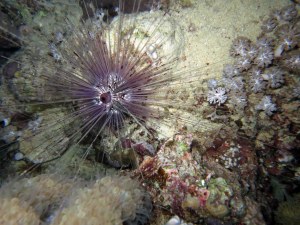 So here’s what I learned online. Use vinegar and hot water. Shave off the spines with a razor. Don’t use a pin to dig around and remove the stingers.

And what I can tell you: Throw away your glove. I did. The secondary stings you get from trying to separate yourself and get the stingers out of your hand will make matters worse. Initially underwater it appeared that I was bleeding under the skin – little blue hematomas had formed around each stinger where I had been stung. That’s not true. The stings have a dye which tattoos you. Funny. The tattoos began to disappear within hours and were gone by the morning. The stingers biodegrade quickly. You can’t remove them easily. In fact because of the barbs it’s pretty difficult to get at them. Infection seems to be some risk but keeping the area clean works mostly. You get swelling but it wasn’t too bad. At least the pain was tolerable. It was my dominant left hand so there was a moment of concern about being hampered to do surgery.

Don’t try this at home: I didn’t have the stuff to remove the splinters (spines) at home. I hate splinters. So I was determined to take care of this despite the internet warnings. Besides, I’m a surgeon (arrogant bastard thinking). I emailed my assistant to prepare the operating (Zeiss) microscope and micro forceps. I spent an hour in the pool in the morning to exercise (and soak) my hand. Then with my operating nurse and my assistant (I needed an extra hand), we spent about 45 minutes digging around and extracting the embedded spines. They were soft and really fell apart. We had to dig (a bit painfully) to remove the foreign debris. I got most of the stuff out. We worked under high magnification (Zeiss operating microscope est price $250K) and with the finest forceps (ophthalmology – not fine enough) and finally cleaned up about twenty to thirty sites where there was embedded sea urchin. Yeah!! Priceless!! It’s now 36 hours later and two nights have passed. There are some spots you can see where we dug around yesterday but the swelling has subsided. There’s very little pain and I promise not to do this again. (Note to myself: Don’t touch anything! Never!) 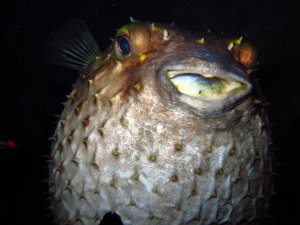 Oops! Back to my story… so the divemaster has trapped the porcupine puffer and it blew up. There I am screaming (figuratively) from pain. He actually saw me struggling but didn’t know I was stung. I, I’m juggling camera, flashlight (I want to see what the Hell had stung me), trying to look at my hand, and trying to get an image of the blown up puffer before they look let it go. You can all have a laugh, I was literally as they say trying to decide whether to “shit or get off the pot.” And the flash on a point and shoot is not geared for fast recycling. So I’m mashing my finger on the shutter release and watching the flash indicator blink as the flash slowly slowly recycles all the while thinking that I’m about to die from sea urchin venom. And no!! I did not think about surfacing and tending to this wound. My reasoning was that the cool water was keeping the swelling in check. The pain would come later. My dive buddy held onto the puffer for a good long while. It ain’t easy catching one. So he didn’t want to part. And more cruelly he spun the sucker like a basketball. No harm. It did swim away and I understand why it shies away from human contact. 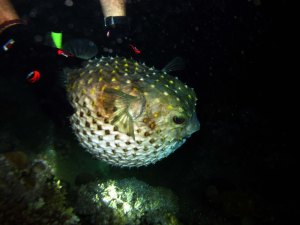 This leads me to remind you that I had previously posted about a small puffer we caught on a night dive. This time the story has a lot more color. 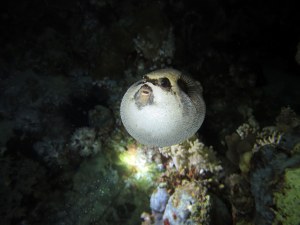 It is a laugh now. But while it’s happening, you think some pretty grim thoughts. Of course the big thing is not to panic. And the second is not to do something stupid, which I did as I tried to remove the stingers underwater and stuck myself higher up on my thumb. And the smartest thing was to throw away the glove, which would have caused more pain if I had tried to remove the stingers and use it again.