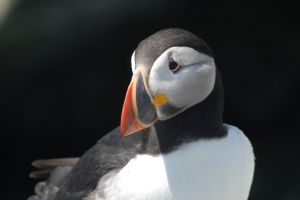 You always remember the things that were hard to accomplish. This was a tough event for me. I had seen a poster or post card many years ago when we visited Maine on a bicycle trip. But I had never had an opportunity to see the birds. And it turns out that it is not easy. I read about a couple of places you could go to see puffins. On one boat trip you never got close enough to see more than a dot in your telephoto lens. That was no good at all. Then there was a boat trip out of Machias. It is way the hell up near the Canadian border and you really really have to want to be there. The boat goes out early in the morning and it doesn’t guarantee a landing on the island in bad weather. Twice!! Twice I made the six hour drive from my location in southern Maine. And twice I was unable to get any shots. The seas were too rough. I learned that as long as the boat was headed out and moving straight it was no problem for motion sickness. As soon as the boat stops, it begins to rock and roll with the waves, and then shortly afterward I feed the fish. It happened twice. And I paid good money to lose my breakfast. Third time is a charm, right? Yes! We got on the island. You have to go into a blind, which is setup to minimally impact on disturbing the birds. And of course I had neglected to bring my big telephoto along. Sometimes you just can’t win. But with what I had along, I filled up a memory card. I stayed until they pulled me out of the blind. Everyone was long done. I had just waited so long to get this opportunity it seemed a shame to not savor the moment. The action was in the birds flying. It’s not hard to get lots of images of puffins standing around looking cute. I got them flying around thanks to Manny who showed me the technique of applying actions sports photography to flying puffins. There’s always a shot you don’t get. That would be an image of a puffin holding fish in its mouth. No, there will not be a fourth trip. 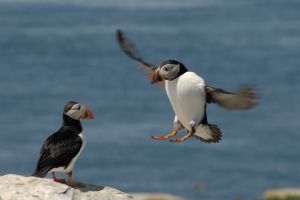