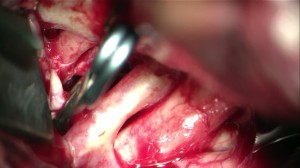 This is an intraoperative image taken through the operating microscope. The scale of magnification would be to look at your thumbnail and imagine this is the field of view. It’s small and you can’t do this without high magnification and sufficient light. The titanium clip has taken the aneurysm out of the circulation. In the view (right to left) are the optic nerve, carotid artery, clip, aneurysm, and third nerve. We saw the other critical structures necessary to be sure the aneurysm was gone and no vascular compromise had occurred.

Emergencies have a way of occurring at odd times. I was busy on another project and was called by my clinic nurse. One of the clinic nurses, very well known and well regarded by the staff, had collapsed with a sudden ictus. She was immediately resuscitated and taken to the CCU. The diagnosis of subarachnoid hemorrhage from a cerebral aneurysm was made after a series of examinations. She was in coma. Her vital signs were extremely labile with the blood pressure so high as to invite another hemorrhage. The prognosis was grim. Nurses and fellow surgeons expressed concern to me about her condition. While everyone hoovered as a supportive audience no one else could really help me in the decision-making and the surgery. I kept to the plan I formulated as information became known. I facilitated and supervised the diagnostic tests. Two operations were performed. The second was a craniotomy in which the aneurysm was isolated and the cerebral circulation protected. The danger lay in finding out if the aneurysm was so weak after the initial rupture that it would let go again during surgery and the patient could bleed to death in the operating room. The operation turned out well from the technical standpoint. It was performed without any exciting intracranial events. For now prognosis for her eventual recovery from the stroke is unknown. It will be many months before we will see the extent of the recovery.

The collapse occurred in front of medical staff who saved her life by timely resuscitation. Otherwise I doubt she would have survived the initial insult. For that I’m thankful. It was the right place and from that moment the right treatment has at least saved her life. Everything fell into place on this particular day in order for this to happen.