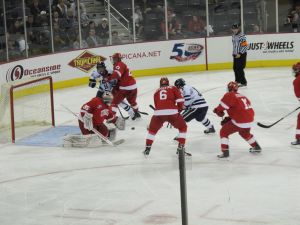 I admit to being a photo opportunist. Alex wanted to follow his beloved Yalies to the ECAC Hockey Championships. It was held in AC, Atlantic City. It’s hilarious because Alex and I don’t gamble. The venue was where they used to hold the Miss America pageant. And no camera; I was stopped as soon as they saw my serious camera gear. I think it was the 80-400mm lens that really scared them. Other people got in with medium teles. So I fell back on my Canon G11 point and shoot. Now that’s a real challenge. There’s a shutter lag, you shoot, and a few milliseconds go by before the image is captured. At that lag, how in the whole wide world do you capture the action. Lighting is horrible and everything is moving to say nothing of the glass that surrounds the rink. You might as well not turn on the camera. So I just sat there and experimented. As with anything, I figured you have to follow the action. That means the puck is where the action is. Yup! I got a few with the puck headed past the goalie. Not great but not bad. You have to look close but that puck is in the frame.

This entry was posted on April 18, 2014 by Victor Ho. It was filed under New Jersey, Sports and was tagged with Hockey, Sports.