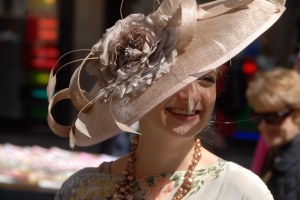 Being based in the Middle East, the day almost got by me. When I traveled to the US recently, the Saudi movie censors put blurred spots on all the crosses in the cemetary scene in Sherlock Holmes. No other religious signs are permitted except traditional Muslim. So my last Easter Parade in NYC was back in 2012. To be honest it’s not a parade. They close off Fifth Avenue in front of St Patrick’s Cathedral and people mill around seeking attention. There are the traditional and the strange all mixed together. 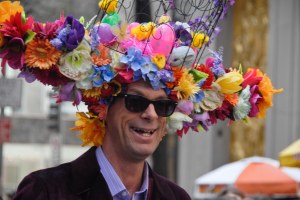 If you wear it, I will photograph it.

Devotees to the holiday, this pair was striking.

And then there is what one might call, “over the top.”

Ooops, almost forgot this one.

I attended one West Indian Day parade in New York. I’d have done it more, but….

I studied the internet and got info on the venue and the parade route. I knew it would be crowded and rowdy. I arrived hours early by subway to scope out the venue and to pick a place to shoot. As I walked the empty parade route, I encountered these three young ladies. They immediately posed shyly and let me take a few images. I took many more shots that day, hundreds and hundreds. I managed to get into the middle of the parade route and walked along side the marchers getting intimately close. But after all that, this is one of the best images and memories of the day. Who knew it would be one of the first shots. … I could have gone home early…