Blood and Gore in the Movies

The color of blood is red, but it can hardly be likened to ketchup. While I actively suspend my belief in realism while watching, it has occurred to me that there are some viewers who actually believe what they see in the movies to be true-life depiction. When you next watch a movie consider the following thoughts on medical injuries. Blood is bright red because of oxygenation. As it dries it becomes a dull red. Old blood is almost brown. Moviemakers would do well to cut themselves and see the transformation of blood through its stages. Knowing the timing, I am constantly laughing at how unrealistic blood looks in many movies. Red yes, realistic no. 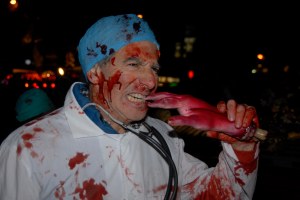 Have you ever had a bruise? Number one on my list of complaints is the lack of swelling depicted. That awful bruise is depicted in a purple kind of blotch on the actor’s face. But there’s no swelling. We wouldn’t want to deform the actor’s good looks would we? And later the bruise becomes green and yellow. Oh well the movie is only two hours, so there’s never enough time to evolve in the healing process. But hey, watch a boxing match and see how horrible it looks to have taken a beating that is severe enough to swell your eye shut.

Instant knockout drug?! Here’s a good thought to hold. What in the world is in that dart or what is that knockout drug? Or what is it that they place over the victim’s mouth and nose that knocks the person unconscious in about an instant? After many years of watching and then asking my anesthesia colleagues…? I realize that I became aware of the technique while I was watching the original Mission Impossible TV series when I was young. Well, to be honest, there is nothing … repeat nothing!… no drug, nada!…that works instantly. I am aware of few anesthetic drugs that work pretty fast when administered intravenously. Nothing that comes in a dart is accurate enough or in enough quantity to do what the movies suggest. Yes, there are poisons from exotic arrow tips, which will kill you, but even that takes more time than we could take to watch in a movie.

Blood dripping or gushing from the nose and mouth is pretty gruesome and common to see in movie injuries. Unless you were traumatized in the face and mouth, the poor victim usually doesn’t have blood vomiting from their mouth or dripping from their nose. A gunshot to the chest may cause you to cough blood. But when I think of all the trauma patients I have seen in the ER, the sight of blood is limited mainly to head injured patients. Yes most gunshots don’t leave you gushing with blood.

Entry exit wounds from gunshots and knives tend to be less bloody as well. A gunshot to the head of which I at least have some experience, has an entry wound that is usually not too much to see on the outside. It’s inside the skull where the damage is done. But there’s nothing gory to see if everything is happening on the inside. I will readily admit to having no particular knowledge of wartime injuries in the field.

Shot or cut, you pick, it hurts. If you’ve ever slammed a door on your hand or finger, then you know the pain is enough to stop you – at least for a moment. I watched Arnold Schwarznegger take a nail through his hand and all he did was lift his hand up and out, then continued on his merry way. Have you noticed the good guys never die after one shot? And certainly it takes more than one bullet to slow them down. The bad guys all fall down on one shot and sometimes even if the bullet is only in their vicinity. Luckily I have never been shot, but I would figure that there is pain involved. No matter if it is a “clean wound that passed right through,” it’s got to hurt. That at least has to make you stop and pay notice.

With all the attention to sports concussion in the news these days, I am fascinated with the blows to the head that actors can trade without being incapacitated. I mean if you “have your bell rung” wouldn’t your reflexes be just a bit slower. And for heaven’s sake wouldn’t a solid kick to the head be enough to make you pause.

At the other end of business a good swift kick to the testicles, yeah “balls,” is going to make the average male double over and not get up instantly with fists blazing.

Where did anyone get the idea that you can actually aim a gun well? How is it that the cops fire so many shots and only hit the criminal with about 10% of their shots? This is a fact where several celebrated NYC police shooting cases illustrated the lack of handgun accuracy. Multiple shots from multiple police handguns and only a few bullets actually struck the criminal. When I was an intern in general surgery I took care of a man was shot while sitting on his stoop in the South Bronx. The two gunmen with four guns shot him from close range. He was alive and kicking. Unfortunately because of the angle his worst complaint was that he had several scrotal wounds. No brain damage there and certainly no blood dripping from the mouth, nose, or ears. I grant you that one bullet can kill, but then again I have no military experience.

We live in a video reset culture. You die, the game restarts, and you play again. You get to die until your skill is good enough to pass you through to the next level… where you die again until you learn. I will readily admit that I avoided medical TV shows like ER – George Clooney – because the medical inaccuracies were too painful to watch. Nothing is more realistic than the real life and times in front line neurosurgery. The truth might be too scary to watch.