Of all the things I have seen this was a spooky scene. I have seen sea cucumbers in the daytime. They are nondescript and uninteresting. My camera points away from the dull uninteresting color. Anywhere else but there is preferable. But Farid turned this one over and it was like a monster zombie flick. Tentacles! They wove and waved in a surreal pattern as though vomiting from a hole on the underside of the cucumber. We were fascinated. I don’t know what it was that caused Farid to turn it over. I had given him a dive stick after my kids left in January. He has made it a well used gift in what we have discovered. 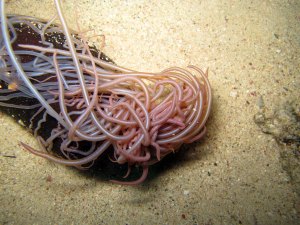