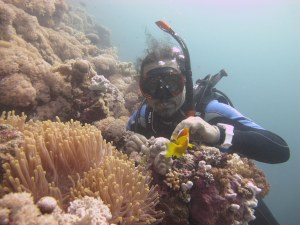 As a general principle I dive with more experienced divers. I have reached the rank of rescue diver master diver. That would place me just below an instructor level. I don’t particularly care to lead or to watch over less experienced divers. I have had many an adventure with novices who have dived with me. A master diver hooked up with me and my assistant. I should have refused. I was going to have my eyes glued to my assistant and another diver was just too much. He was good. Off with his regulator and he posed for a picture with Nemo. 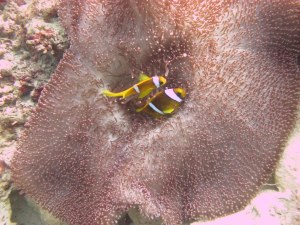 I was taking some shots of my own. A blue spotted ray presented itself for me. Not too shabby, the day was going well until the second dive. The water was a little rough and there was a current. My assistant had buoyancy issues. 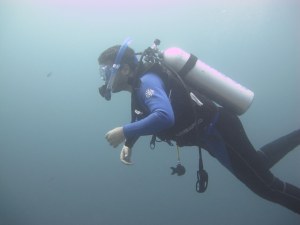 Looking at his profile it is easy to see he is not completely comfortable in the water. If you cannot tell then you have not dived enough. I had already added weight to him but he had a tendency to float up. And at the end of our dive he was unable to remain down. 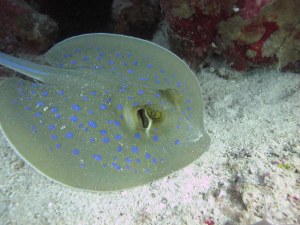 No big deal except for the surface waves and then there was the random up and down motion to make instant sea sickness. He threw up. Not good at any time and especially when you are underwater with a regulator in your mouth. Nasty! So here I was in the rescue mode holding the poor guy by his regulator and bringing him in to the shore. There was another diver away who watched intently as I did the rescue thing. And our companion master diver grinned at me and said, “At least we came back – three.” There is no doubt some humor here somewhere. As for me, a little more up and down and I would have been sick too. I am wondering if it was such a good idea to get rescue diver status.