I actually have a small following here in Jeddah. So the news of specials at restaurants is news. And there are a few who follow up and eat there. I recently discovered that this is a hidden gem of lunch. You get a pretty good spread for less than full price. A bargain! Keep in mind that he prices are generally less than what I expect in the US. But hey! 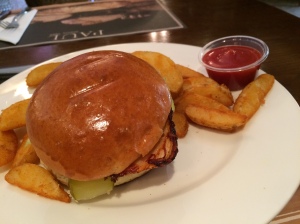 Here’s a classic French Bistro. There is a founding branch in Paris. At least there is a promotional video that says that it is from France. The baked goods are pretty French but lack true pizzazz. But hey! It is a decent menu and I have enjoyed many a Croque Monsieur there. The hot chocolate is very different. It is thick and almost like drinking a liquid chocolate bar. It’s good!

Lunch specials are 48SAR and are varied by the day of the week. So when I appeared on Thursday the special was a grilled chicken burger. This was a grilled piece of chicken in a very nice roll with lettuce and tomato and pickle. The chicken was dry. The best thing was the roll. I will applaud the baker. A wimpy lettuce salad was forgettable. No drink but coffee and dessert were included. The coffee wired me. it was expresso and I was definitely wide awake. The pastry was a mille feuille and was filled with custard that was overly sweet so that the sugar was the dominant taste. Of course the pastry shell was tasty. 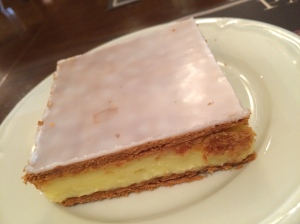 Service was subdued. This is a nice restaurant at different times. Late afternoon lunch was not special and I don’t have much interest in the other offerings. I would return for the a la carte menu.