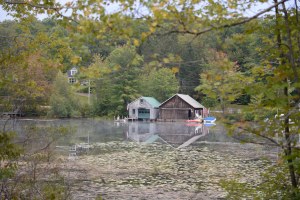 There was a play on Broadway that became a movie that had a haunting theme song. I saw the Broadway play. The movie starred Henry Fonda, Jane Fonda, and Catherine Hepburn. Henry won the academy award in his last film. Jane accepted on his behalf. The song is in my playlist. Dave Grusin composed it. So I was moved when we passed Golden Pond. I wasn’t looking for it. The pond just came up and bit me. But all the significance of the play, the movie, and the sound track are now linked in this image. We didn’t stop long. I just filled the tank. Looking at the sign in the gas station it announced where we were. That led me to take the image. A moment. A fraction of a second in shutter speed time.