There is a such a thing and it is “rare as a blue moon.” I won’t go into more detail than to say that is it a full moon that occurs twice within the same month. I was online chatting this evening, well actually my 5AM, and I noticed. And it occurred to me that it was the second such so soon after the recent. How do they do this? Anyway sure enough the whole world but me knows.

Now to tech. The moon is very small in an iPhone 6 plus. And it is large in a Nikon D610 with 80-400mm lens. And it can be enlarged even more. But the trick is that the moon is very bright. Bet you knew that?! So it means that the exposure is manual and the setting is 1/200 shutter and about 500 ISO and f stop about 7.

Now to the romantic. It is indeed a rare event. And in the time I took the pic and we traded photos across 6000 miles, the moon has set. It’s cloudy and stormy on the other side. And here the grey sky of dawn has obscured the moon. So it is indeed ephemeral as it is rare. That is enough to make you believe in magic. Yes, this is a real time post. Photo were taken minutes apart miles apart only moments before I made this post. 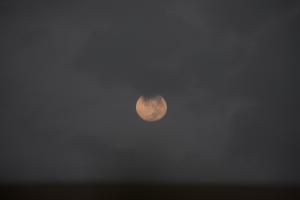 And now for the piece de resistance! The moon came back for me! So I got a dawn shot with a blue grey sky. Same exposure, use 1/200 and F7 and ISO 500. It got me there. It is counter intuitive. But the moon is bright. Manual exposure is the only way to go. For once you have to actually control everything. Imagine that.

And now! It was also a supermoon too! That is when the moon is closest to the earth and appears larger. Not much but it is so. You can’t tell and neither can I. But it is . So the blue moon is rare, the next will be Jan in 2018. So this was an event you missed if you did not see it a few days ago. The last coincidence was in 2012. The great and mighty Oz does not say when the next coincidence will be. No matter, this was a lot of fun. Alas there are only 12 blue moons over the next 28 years.

I guess I just had a very special night. I shared it then. And I share with you now.