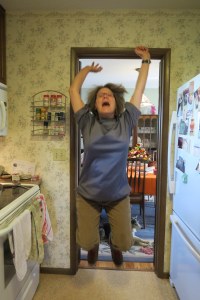 ‘Cause there are two. Be patient I’m only doing one post at a time. Two – count ‘em two. I’m a gluten. Punishment? The first was staged in a kitchen then moved to a second kitchen and meanwhile I stayed at an inn far from the kitchen. Get it? I got it! – as in shot. That’s the next post. This one was about the kitchen in which the turkey was baked. And it was fully stuffed too. So think of a small galley kitchen. And then you don’t know the ingredients, spices, pantry, pots, pans, knives, or anything of how temperamental the oven might be. Think disaster. Nope, didn’t happen. Wait for the next post. This one is about how tiny the kitchen was. I’ve cooked in small kitchens. And maybe I told you about the Thanksgiving dinner in 2006 where as we sat to eat, a set of wild turkeys crossed the yard in front of the window before us. Magical! No, this was about the things people will do if you ask. We were talking about jump photos and Richard Avedon who popularized them in his portrait work. Yup, Lee jumped. The secret for someone who can’t jump is to fold your knees. You look so much more athletic! No, I did not think this up myself. My kids told me. They were embarrassed at how bad I looked in their pictures. Humbling, ain’t it?

How small? I had to park the turkey out of the oven on the washer. No space. Someone was doing apple pie in a toaster oven. I’ve never seen that before and Jane admitted it she’d never tried it either. The pie was gone on the first round of dessert.

This entry was posted on December 17, 2015 by Victor Ho. It was filed under Uncategorized and was tagged with Food, Jump, People, Thanksgiving.