Disaster Strikes – But I saw it coming…

No, this is not the second Thanksgiving. Wait patiently; it’s coming in a few days time. This is the annual chestnut cake. I’ve not made it myself. So I had to improvise. The food mill was a cheap piece and barely was serviceable. Caveat: get a good tool if it is important to your project. Yeah, yeah. Hey, it’s a nice looking cake! And I got someone else to do the whipped cream. Yes, I’ve whipped it into butter once upon a time. But that is not the disaster. For a change but not extraordinarily, I don’t have an actual picture. Nice cake huh? 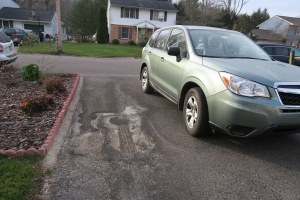 It starts with the making. We prepared the soup near midnight the evening before. The next day was a full day’s ride to Elkins, WV. The soup was secure in the rear of the SUV in a pot with the lid taped shut. Insufficient for the task I might interject. You can see the disaster happening in slow motion already? In the dark, as I opened the hatch and moved the cooler, the pot beneath was precariously leaning on the edge and went on over. About two cups remained in the partially overturned pot. The rest was on my shoe, the bumper, and the driveway. (Note: see spot.) Salvage was not an option. Folks would have noticed road dirt not pepper in their soup. Off to the market on Thanksgiving eve. Yeah, it was a beat market. No, butternut squash, and then hours of cooking that I did not count on was a heartbreaking prospect. Acorn squash to substitute, until… light bulb – pumpkin! Yes, pumpkin puree for pie; it works. Substitution! And with the right seasoning….the soup was a success! Really, and not out of sympathy; I made it again, same formula and it was a smashing success two days later. And I will appreciate it if you don’t tell Jules about my improv soup recipe caper.

This entry was posted on December 18, 2015 by Victor Ho. It was filed under Food and was tagged with Butternut Squash Soup, Chestnut cake, Food, Pumpkin, Thanksgiving.