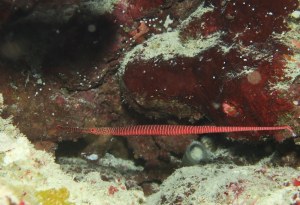 Ok, so I dive with a buddy whose camera flash is messed up at the moment. He’s using a Gopro. It’s definitely not as much fun in my opinion. He’s been my fish finder. He finds stuff and I photograph. It’s not quite fair. I hope he fixes his flash and can image again soon. Meanwhile I had a very nice experience trailing him and shooting when he found stuff. He’s using a flashlight during the daylight dives. I laughed. But he shines his light into holes in the coral and well… here you are. Unfortunately, there was only one image. One! This pipefish was definitely skittish. I saw it. I glimpsed it. But I could not maneuver and get a shot. So here is the only image. Decent! Not enough to satisfy my image library. But I came away with something and that’s what counts. You definitely don’t get to see one of these every day. Add one more to my catalog of the unusual and rare.