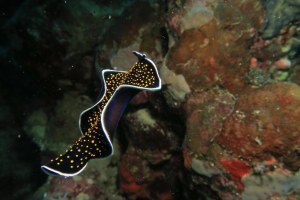 It’s a gold spotted flatworm. Names aside, it is a black flat thing with golden spots. The name – duh! I have never seen it move. Any time I ever encountered it was a black leaflike thing that just was a curiosity and a few images. It’s got a head! Well at least there are horns.

And it flies! Imagine that! The dive was going along and I was seeking things to image. If I say shoot, people think I’m using a gun. Yes, I got that question once. An elusive trunkfish was swimming away under a coral and as I gave pursuit, there in front of my eyes… a flying gold spotted flatworm. No! They don’t fly. Right. It’s not possible. Read: Disbelief! Yes, I love finding unexpected things.

The first time someone pointed this worm out I thought it was just some black debris on the ocean floor. I image everything and discovered it was a creature later. They don’t fly! But, to my utter amazement this guy was undulating in open water and headed for the coral to land. Yes! I got pictures. Great! I called over my dive buddy and he got a spectacular shot. Yes! I’m embarrassed. He shot a couple images and got a true Nat Geo image. No, you don’t get to see it. It’s his image and this is my blog.

But the image was exposed perfectly and showed my camera lens aimed at the flatworm from the opposite angle. Phenomenal! I thought I had a good shot but his was a learning experience for me. So, now I’m experimenting with technique and getting better. New and improved.