Another new one! I have never seen this. Actually it looked more like a random coral. It actually photographs quite well. But the muted color underwater fooled me. Now that I made you look, it resembles a party dress. 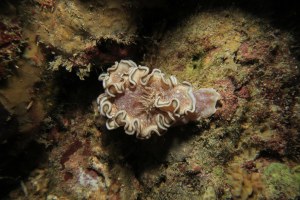 I would never have noticed it except for my dive buddies. Everyone had a shot at getting an image. Then they moved off along the reef. The problem with subjects is that they move and you don’t see them again. So take your best shot. You might not get another for a long time if ever. The nudibranch moves slowly as measured in millimeters a minute. But they move. And this guy moved under the coral.

Bad for my shot, so… I played with the wildlife. I moved it gently and got more shots. Ok, I thought I was free but Marie asked me if I had moved it after she swam away. Don’t ask don’t tell. You must admit the name is pretty clinically boring for a rare subject. Technical note: if you shoot underwater, and most of you don’t – I now understand strobe lighting better and how it makes better images. How did I do without it? Here I used a fast shutter and increased the F stop. The lighting was really nice. Maybe next I go over to two strobes.