Here’s a behavior I don’t see very much. Isn’t that the point? Common things are not as interesting as the unusual. Stonefish were a lot of fun and good images when I first saw them. They don’t move too much and you can shoot away. But I have hundreds of images. 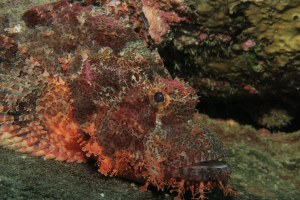 So what’s different? I found one and was shooting away. But then my buddy wrested the camera from my grasp and moved in and magically got this shot. I swear he did not speak to the fish underwater to get him to do this behavior.

Of late my buddy likes my camera and shoots with it. I admit the open mouth is not my shot but it was in my camera. It’s not the same. Close, but no cigar.