Do Over Do Over – Hermit Crab

I would be happy with any image and got none the first dive….nada, blank, nothing….equipment malfunction…like that wardrobe malfunction during superbowl… only no fun at all.

Did you ever wish you could do something over? My first dive of the day was over before the first image. Memory card error! Maybe I just forgot to put in the memory card after I downloaded my images from yesterday. Dementia? I’m old enough. Oh bother and worry! Nope it was simply a contact issue. I found out later. So, the water is cold but I simply explored. I looked and poked and saw what there was and did not take a single picture. My my! It was torture. And if you know me, it truly was a hard thing to be freezing and cold and not be able to shoot a single thing. I followed the group and was as good a sport as I could be under the circumstances. Everyone else was happily shooting away. 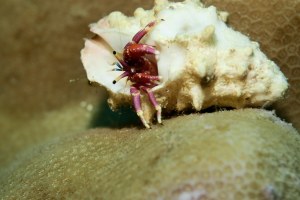 Ah! A shell. I guessed and I was right! It was the home of a hermit crab. And he was home! And he was active. He did not like his shell being turned over. He was hiding. So for about five minutes I turned it over and watched him turn the shell back. Hey! A shell game!

No image, camera malfunction. I was heartbroken. I’ll never have another chance like this again. One of the group wandered by but was pretty blasé and didn’t even take a shot. He simply nodded and moved on.

Drat! I still think about that shot that wasn’t. I know I’ll never see it again. Underwater things are not found by landmark. I pass something, turn around, and can’t find a thing that I just saw the moment before. No! Not dementia. The landmarks are simply too confusing. It is akin to directionally challenged on land. And to the many women in my life for which this applies, you know who you are and what I mean. I used to hang back leaving a restaurant because someone I knew always walked in the wrong direction from the car. You would think the odds are fifty fifty. Nope. About 99 to 1. Second dive: I was banished toward the upper reef. It’s a long story short. I had been in “deco” the day before and was not to be diving deep and really not even diving. Sorry mom… And then low and behold! Wow! I recognized the spot and the coral and the shell! Yes! Happy day! I actually found the shell and the hermit crab. And I got to shoot him to my hearts content with a spiffy close up diopter that I was given loan. And I got shots! The crab would stick out his legs and claws and right his shell and hide. And I would tip it back over and over and shoot and shoot. Yup! Good shots, good focus, good exposure and… a do over!