Too common? I see them all the time. They don’t lend themselves for pictures. The bright orange is darned hard to capture and expose.

The orange is like snow. It’s just darned hard to get the right exposure. Capturing texture is a problem. You wouldn’t know. But I can tell you. And you still don’t know the trouble I have. And I’m sure you don’t care too much either. Show me the picture!

And there are males which are different, like bird pairs. I didn’t know that and still credit Jules with telling me. She looked it up. Why? I grant you the internet is full of wild and irrelevant facts. But why would you be prompted to look up the differences? Ah? Maybe she was just looking for ID? The males have a long dorsal fin which is rather nice when deployed. And it’s not too often deployed. 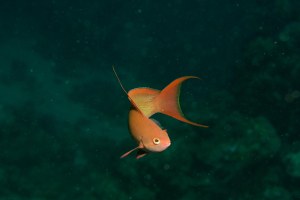 And it moves and is hard to capture in an image. And so this is a long term project. I know the image I want and keep waiting for the time it will present itself. And would you believe I’ve called them by the wrong name for four years. Jules gave me the wrong name. She is right about the male and female being different. Hmmm, I learn new things everyday.