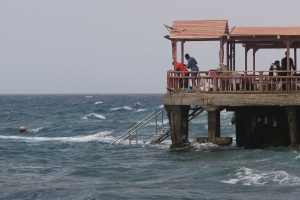 We dive here. The resort across the way in the image is Dream. There’s blue sky over there. They used to be very crowded with divers. Now my place is where the crowds are. Maybe they became diver unfriendly? Who knows? Waves on the ocean are nothing without some comparison. So, look across and there are whitecaps. You can see some swells. I’m not a boater nor a sailor. I can tell you the wind was steady and hard from the left. The stairs are covered in waves. Hey! I just noticed the stairs! My! They weren’t there before. Someone put them in. Neat! You used to have to jump about three feet into the water. No big deal unless you are there and about to jump. We would fall backwards into the water, no jumping forward. I don’t know why. But falling backward is unnatural. And there is a moment of panic as you let yourself fall. Nope. Not my cup of tea. Ok, they took care of the jump. You can walk the stairs into the water. The trick is climbing back out. No easy feat. There is nothing under the stairs. Right, there is no floor! Go figure! 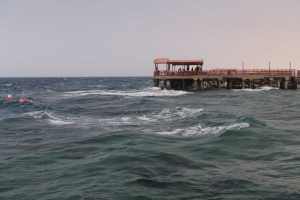 Anyway, we dove in the morning. We were down an hour. The water was smooth as glass still and calm. And when we emerged, it was as though the world had changed. I did not pay attention. These are not intimidating waves for an experienced diver like me. Smug, aren’t I? But within minutes we got word the resort was closed for diving. There was already a sandstorm in Jeddah. And the wind was picking up speed. Gee, it’s about thirty minutes south to Jeddah, no more than about 15 miles. Sunny, windy, a few waves, and we had to stop diving. Hey! I don’t make the rules. I just play safe. And besides, I was a bit chilled from the first dive. It’s still not full blown spring here. That damn water is colder than my dive computer says. There are times when 79 degrees feels a whole lot colder than it looks. Yes! Mixed metaphors and fractured sentences….

This entry was posted on April 4, 2016 by Victor Ho. It was filed under Red Sea, Underwater and was tagged with Dream Resort, Red Sea, Sandstorm, Storm, Underwater, Waves, Wind.