This is a close-up of the nudibranch that started the series of hermit crab shots. When you are in focus, you are. There’s no way to fake it. And so you know pretty much whether to keep an image. I could have done better. But while I was shooting this guy, a shell twitched. I’ve learned to watch for movement. Actually it is a primitive sensory input for defense. Anything moving is a potential threat. You knew that, right? And so the eye picks up movement first. Anyway, I saw the shell move. No kidding. That led to a chase and a half. And I was shooting the hermit crab, this nudibranch all but forgotten. See, there was a story somewhere to tell. 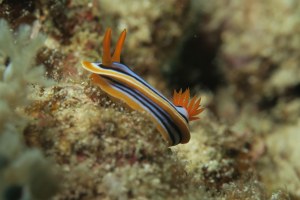 I see this particular kind from time to time on the reef. So it’s always fun but not extraordinarily special. Never pass up a shot nature provides.