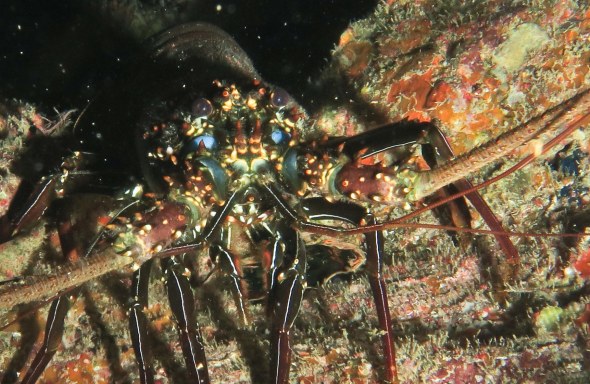 The don’t like white light. Great! Tell me after the dive. I learned this on my own, thank you very much. My buddy found it, three in fact. He did not bother to chase down the little one. He tells me this afterward! The first one was impossible. Everything was against me. Current, backscatter, and shyness (the lobster’s). Everyone loves to eat lobster. He knows it too. 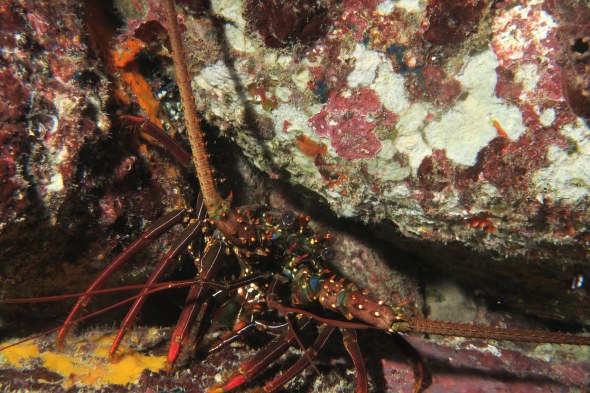 Racial consciousness? You know that a one time in Maine lobster was fed to the workers for dinner. And they objected. There are signs saying that lobster could not be served more than twice a week. I paraphrase but that is the gist. Ugly. I was afraid to touch it. It reminds me of a roach. I hate them too. My book names three different lobsters with the same color markings so take your pick. Lobster! No claws! Funny. The lobster has no claws, the best eating part according to my friends who eat them. And the shrimp around here have claws. Go figure? 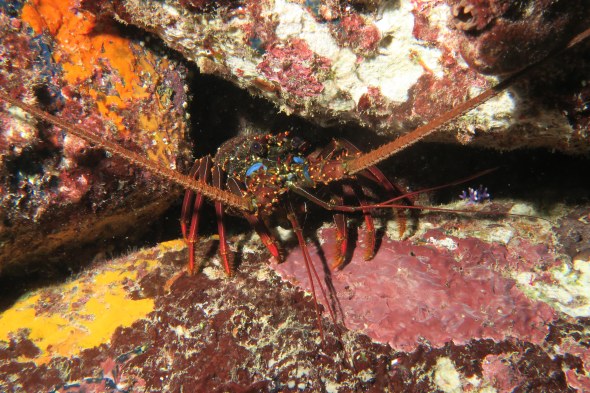 Shy but not too bright. A pun. The poor guy would hide from the light but as soon as it was off he’d poke his head out again. They also say that lobsters have a brain the size of a roach. Fine. But roaches are a whole lot smarter. I never got a clear shot at any roach in my house. And they are big too. Remember Raid – Roach Motel – roaches check in and don’t check out? It was a box with roach allure and glue to hold the insect. On night the box shook. I thought we’d caught a mouse. Nope, a big roach came out of the box, shook off his legs, and continued on across the floor. They fly too! But that’s another story. But if you’ve never seen a grown man dive for the floor when a roach dive bombed… no, it wasn’t me.