It often find myself looking at the background of the photo.In that case you will see my computer screen. I go to Amazon and read the NY Times. And the article is about mean things said by supporters at Trump’s rallies. Cats are curious and like to get in my business. And I tolerate a lot. How else could you get such a photo op?

No diving again. I was almost there and got the word that the waves were too high. Darn! I headed home. What to do? Ah! Cats. I have lots, too many, pictures. Only a few select can be posted. Picture fatigue. Funny, some folks don’t mind my prose. And then David complained the other day about my not giving him sentences. It was messaging. You don’t use sentences? I’m old. The protocol and communication via email and social media are lost to me. Fine! He was asking if Freeport was worth a visit. He never said that. It’s an outlet center. Shopping. LL Bean. That store is open 24/7. Really! Oops, no sentence again. Drat. Darn. He’s on his bike trip to Nova Scotia. There is no margin to carry extra weight. “Don’t go,” I advised. He messaged back later, “It’s a nice town.” Following advice seems to run in my family. 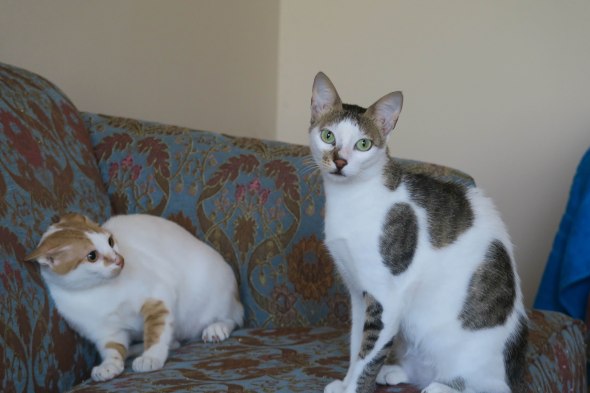 Anyway, I got a lot of cat pics after I brought Bidi in. It’s suddenly quiet. And then only Lulu and Casi appeared when I made noises to draw out any cat’s curiosity. Bidi was hiding. Ah! She’s got Casi’s old spot. And suddenly Casi and Lulu get along. Imagine that! No, no, no, fish not cats, I’m a fish person. I shoot fish. Repeat and repeat again, I shoot fish. Oh my! Those are pinned back ears. Lulu has been admonished enough that she checks with me before she is about to eat Casi. … no cats were harmed in the making of this photo.