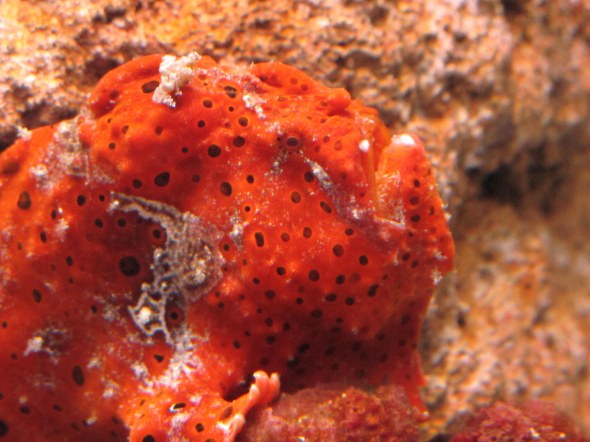 We actually went to the aquarium. It was newly opened and Jules was game. Dolphin show! We don’t see them in the Red Sea too much. And so far I have not had a personal shark encounter in the Red Sea. The aquarium is just fine with me. Sometimes I just take a picture. Ha! I take lots. But usually I have a reason and purpose. This image was colorful. Graphic, bold colors, I shot the image. It was to me a bright colorful coral in the tank. Later, I mean much later, and definitely in retrospect, I realize I took a picture of a frog fish. Yes, that’s what it’s called. But really, I took the image and never realized. And now that I tell you, I think you suddenly see the eye and the mouth. I’m told that this fish is very easily missed in the sea. I wouldn’t know. I’ve never seen one. Ha! But I’d like to… 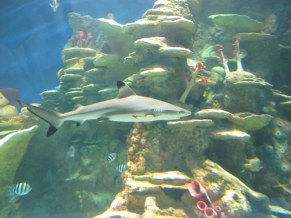 I like the dolphin show. I think it’s neat to work with them. And I am amazed they are so strong and agile. And now I’m thinking that their freedom has been taken. They are safe and fed regularly. Is it a reasonable trade? No. What about the shark. He swims in a recreated reef environment. Better?