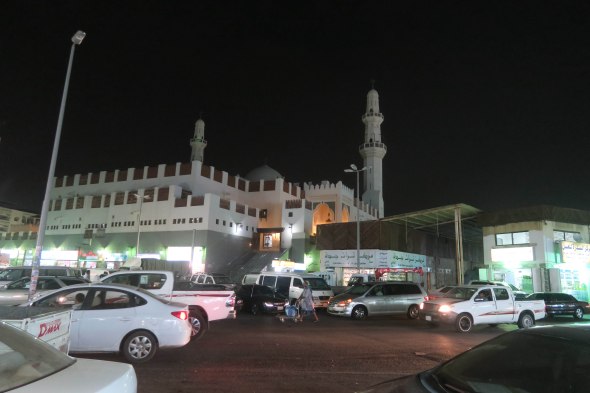 There is a genre – street photography. I’m shy. And I dislike encounters. And I don’t want to ask. And I don’t want a pose. And I don’t want to be giving someone money to take a picture. You may not like it, but in America, anyone on the street is fair game. Commercial use is a different story. But for personal use, it’s all good. Here’s what you do. It’s simple. (Somehow people don’t object as much to iPhone. But I use a camera.) Use your camera on wide angle, set the shutter speed to about 1/125. Then do what it says – point and shoot. Don’t look. There is the flavor of an imperfectly composed shot. It works. You hit. You miss. Sometimes you win. If you are unsure shoot more than one. Don’t stop moving. And don’t let anyone catch on that you are taking pictures. Slices of life, unposed, unpretentious, natural…it’s more for me to have a flavor of life to recall. In Jeddah the heat of the day has everyone indoors. Some shops are open. But at night the whole tenor changes and the streets of the old city are teaming with activity. The heat of the day is lowered to simply unbearable as opposed to daytime hell. And digital allows you to take images I could never do with film. There’s a vibrancy to night life in the city.

Push carts abound. Vendors will sell any kind of produce. The big supermarkets – nope – people buy, sell, and bargain – probably illegally. But there is definite supply and demand. 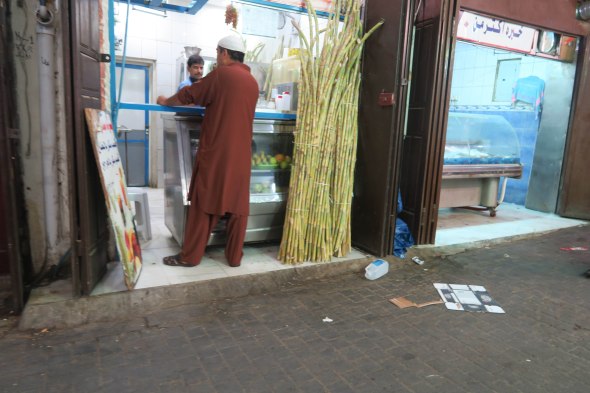 Sugar cane – it’s crushed and the liquid is served up as a drink. It’s bland. Almost yuck! You need to add lime and ginger when you crush it. That’s a drink! Jules and I learned this in Zanzibar. She drank the whole thing and left me a taste. So I know from that small sample how to fix this. But nope, not in Jeddah. 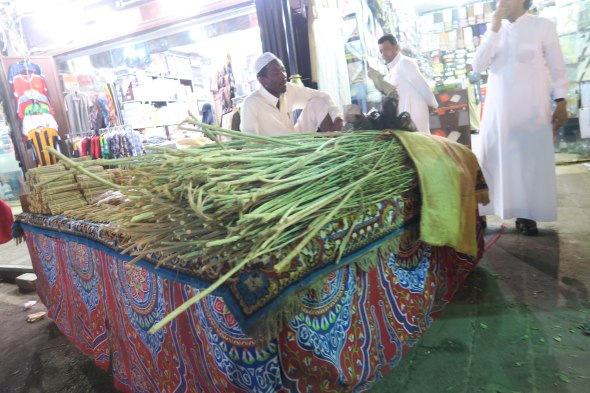 Sticks – there is vendor in this spot, his spot. And now there are a couple of others – competition. They cut them and bundle them. They are to rub your teeth – like a toothbrush. No Crest, Colgate, or Tom’s of Maine. Buy a bundle. Share them or use them yourself.

Sewing – the tailors use a fairly unsophisticated machine to do their magic. If you are native, you wear a thobe and someone has to make them. It looks like he has made lots. And overwhelmingly they are white. And, abayas are black. Who’s the biggest loser?

Life in the city. It all happens at night. There are huge super malls. But what’s new there? Everyone has seen a mall by now? Online shopping! Walmart is scared! Amazon rules? Imagine the next big thing….