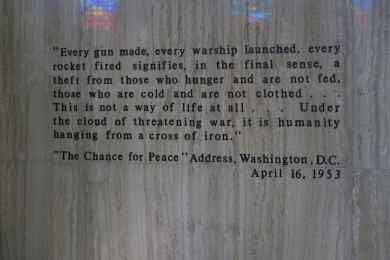 In the aftermath of the recent national election I found myself in the most unlikely of places – Kansas, a red state – at the Eisenhower Library. I guess there is a plan. I had expected Dorothy and the wicked witch and instead got some comfort and inspiration. All is not lost despite the news and the horror of the outcome. (I guess you how I voted.) “I’ve never voted for a winner,” I had proclaimed after I cast my vote. And as always I was completely surprised that the “left wing biased media” had failed to predict the election with failure as abysmal as a weatherman during a winter blizzard.

It was heartening to watch a dated video from my childhood ’60’s and realize that there are good people. Evil does not prevail. There is good that comes from horrific war (WW II). The bad guys (bad hombres) may have their day, but, good can win out. Patience. To all of those who agonize, patience. To the smug, your time will come.

This entry was posted on November 15, 2016 by Victor Ho. It was filed under Travel and was tagged with Abilene, Eisenhower Library, Kansas.