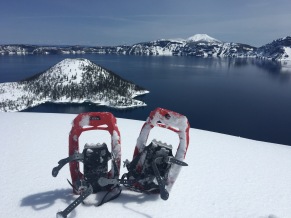 Happy Birthday Dave. He’s been to California and the Oregon coast as well. Crater Lake? Snow shoe. It’s not a bad life to get around to such nice places. All the best. 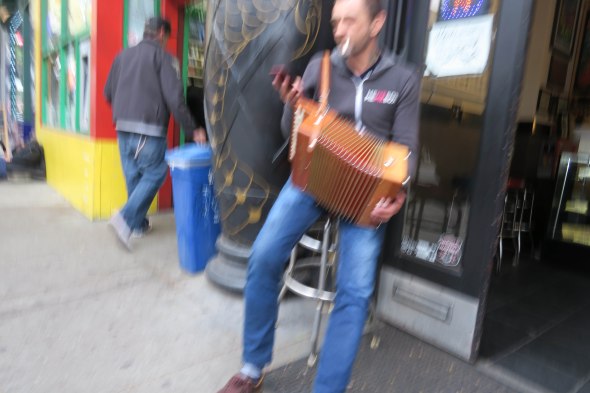 Home of the hippies. Hey! This was my generation. To look at the neighborhood, it still is – hippie. There are concessions. You can play the accordion while texting. Be serious. And the tie dye is very expensive. But it’s authentic. …so they say. Funk. You can look cool, be cool, or are cool. It was hard to tell the difference. “Imitation?” is the sincerest form of flattery. 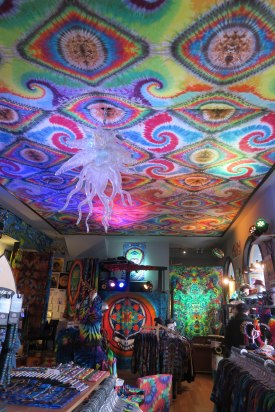 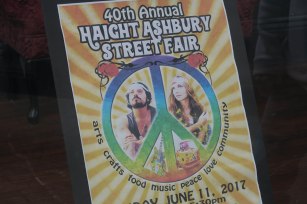 The Castle – it was/is a ranch/camp

It’s not a castle; it was a ranch. It’s a castle. Mr. Hearst took 28 years to build it using the same architect, a woman named Ms. Morgan. He got carried away against the wishes of his mother. 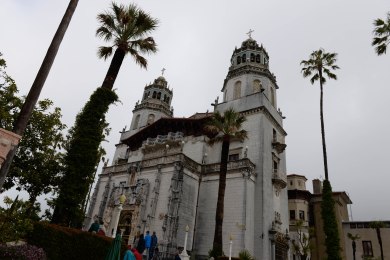 The lands surrounding the castle are still in use as a working ranch and preserved as a California park. The grounds are opulent. It was informal. You wore a suit and tie to dinner instead of a tuxedo with tails. Oh?! It sits high on a hill with a commanding view of the Pacific. Look above the church to see the castle on the hill.

(They do) Nothing. They are like bumps on a log. Actually, they look more like the log. At first glance you might even think the image is black and white. But… we got to see them up close. Not too close. But we were way close enough to get as many pictures of a drab brown log as you please. Hey! They were not active because they were resting. These are juveniles and mothers. Birth has come and gone. They are born at 70 pounds and drink mother’s milk eventually weighing as much as 280 pounds. Then they are on their own. No activity today. Just sleep, rest, and conserve energy. There will be plenty of time for mating again later. It was hard to photograph any action at all. Oh well…y’all come back soon… 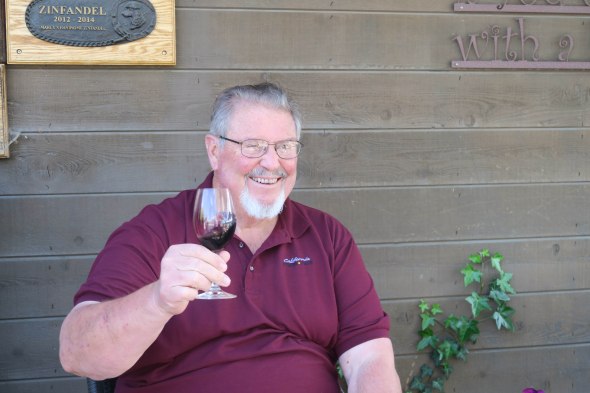 Whine or wine? I still don’t drink alcohol. Yet, I am gracious. Oh brother, gracious? Perhaps, “dragged” to breweries and wineries. Oh well, it’s nice to cater to someone else’s temptations. 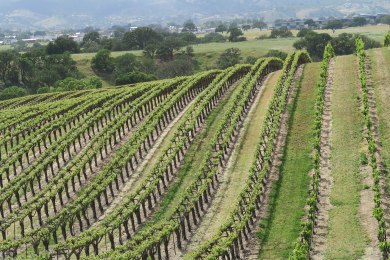 I need to be careful lest my posts become photo essays. I did not know that central California, San Luis Obispo – Paso Robles, is a prominent wine area. Everyone knows Napa. But… We wanted to explore the wine caves… alas man made. The best news was meeting the owner. He sat at the entrance enjoying the fruits of his labors. Yes, there is a happy ending to some stories. Meeting the owner for a chat was indeed special. 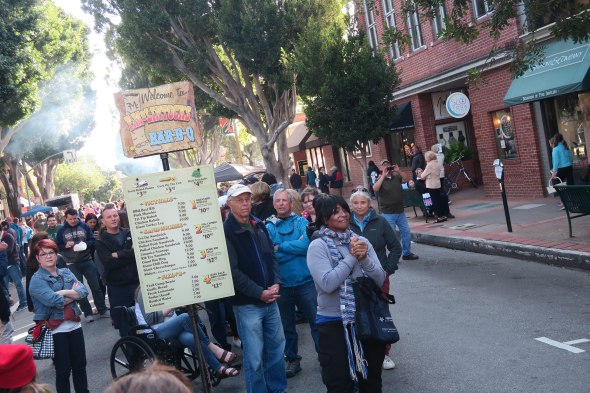 The look on her face says a lot!

But…I’m from New York. There are lines everywhere. I try to avoid them. I don’t go to restaurants that require an excessive wait. I’m averse to reservations. Too many choices… I was blown away by the lines for the barbecue. Was it that good? I’m talkin’ lines down the block. People waited patiently at multiple booths. It must all be good. We cheated. We ate in a local brew restaurant; we sat, we drank, we ate; we had clean fingers when we were done. 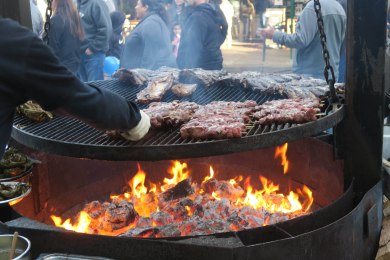 The line up behind that first woman in line stretched to the end of the block… and it was a long block.

… and San Luis Obispo advertises a phenomenal street fair every Thursday. It’s a combination farmer’s market and food fest. They close off a downtown street and crowds come to shop and eat. It was so nice to see ripe red strawberries. Corn, anyone? 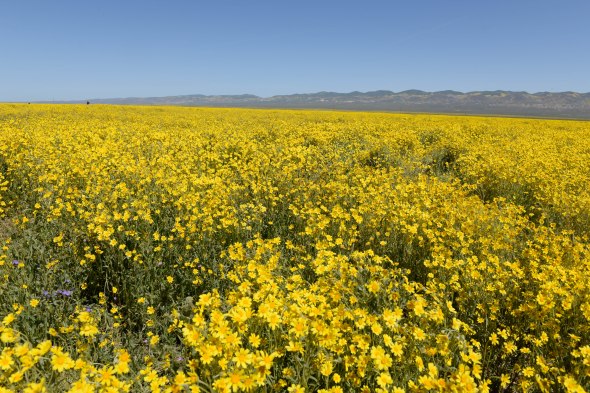 Carrizo Plain Monument – Go now. Do not stop. It won’t be this way for too long. 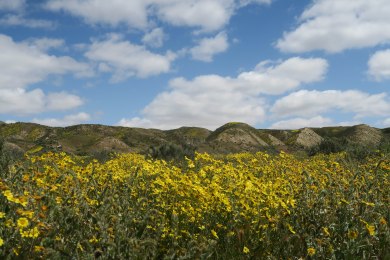 The California drought had a silver lining. After years of drought the recent rains brought a super bloom of wildflowers. And it was in the news just as we visited California. We got tipped off by Jules. The fields of yellow for as far as the eye could see were complemented by the hills covered in the same. It was quite a sight. There was a small problem. We were pretty far from civilization and the gas was running low. It was about to be a very long walk out from the park. And the first gas station outside the park, they got me; $3.49 a gallon as compared to $3.03 nearer to civilization. Tank up before you go. 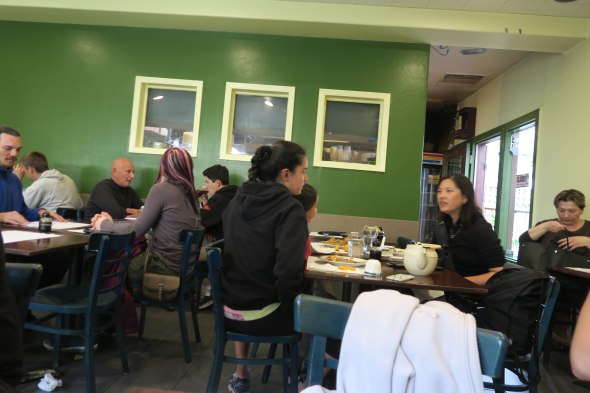 Call me whiny. We arrived in Jimmy’s Wok in Carmel via the back door through the kitchen. Yeah, it was a legitimate door. We probably should have just walked out the front door but we were in a hurry and wanted a quick lunch. Mistake! Service was horrible. Food was good, hot, and tasty. The chef was yelling in a high pitched sing song voice in Chinese most of the time we were there. And the service was terrible. Did I already say that? Oh my! I’m old and deaf now. I didn’t hear myself. How bad was the service? Let’s say that the trio who sat just before us were gone before we got our soup. (They got service.) Oh, it was not too bad, just slow. Wok cooking is fast! How long does it take to ladle soup from a pot? And we were on a mission and wanted to move on and see what we could of Carmel before we headed on down the coast. You know the drill…

I find that invariably I press the shutter a moment too soon or too late to capture a good shot of a breaking wave. I have some good shots. And then there are lots of close but no cigar shots. You make the call. I’m happy I got something that was worthy to comment upon. 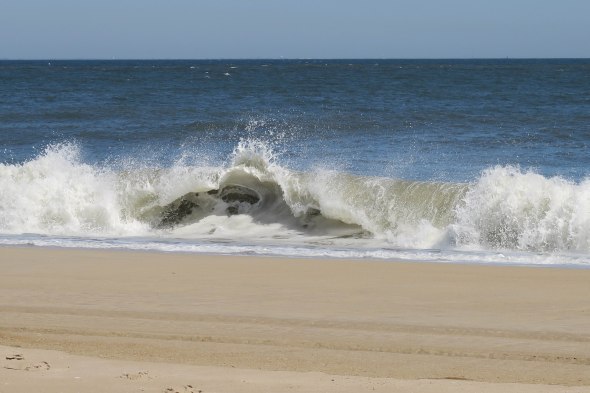 Saw one! Usually the nest is way off yonder in the marsh. You see a dot. Nope. This one is by the side of the road. Hopefully more shots will follow. But it’s exciting. I’ve been around long enough to see something else special. Thanks. 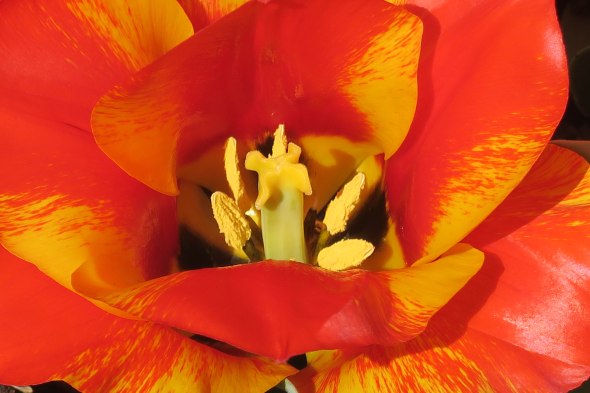 What is spring without tulips? My camera battery was dead. One shot. Got it. Happy. 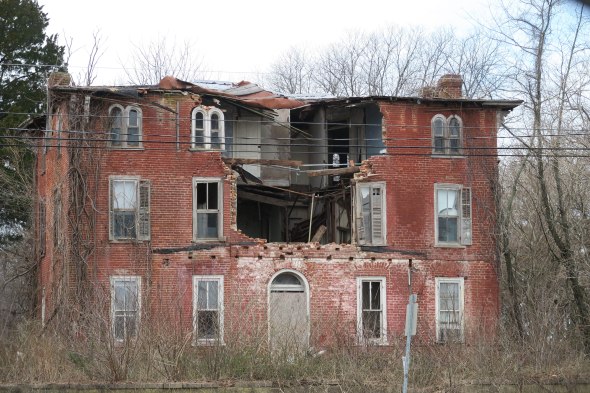 There are plenty of old and rundown houses I have seen in rural America. Lately, they are on my list to photograph. My problem is that I am usually driving and don’t want to waste time to document sadness. I was stopped at a traffic light headed north. The only thing left is to knock it down. Too bad. There was once a lot of love and joy in this house? 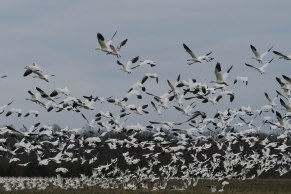 I ran into the field of snow geese to get a shot of them in flight. There was a truck parked about a hundred yards away. The hick with his camera was unhinged by my heinous act and he told me he got a picture of my license plate to report to the owner. I’m waiting. Booooo!

We ate in a winner 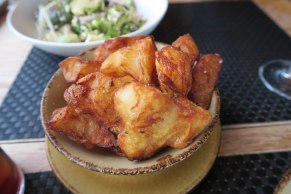 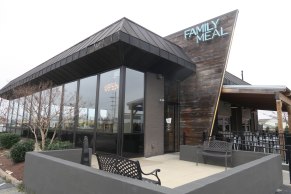 It was a winner. The owner/chef was a winner of Top Chef. He was the twin who came in second. It doesn’t help me. I don’t recall ever watching a single episode. But he’s a locally famous chef and we ate in his place. Wow! A winner designer chef and we got in just before the place was packed and crowded on a Sunday evening. It’s a diner. Home fries? I never order them – needless calories. My date did it. Wow! They were as good as they looked. I learned a new thing. Yes, it was well worth the stop.

I grew up. I’m old. It’s a fact. You may dispute how old you are relative to me if you… remember phones that have no dial. To signal the operator you just lift the phone and she’s there….like the refrigerator light that comes on whenever…. I got to ask…What do you do with old shoes? Someone else will wear them. Yup. Lots of people do. And, my feet don’t stink.

Spring. Daffodils. Shoot. I’m working on a better image. Technically sound, I got the pistil and stamens in focus. Not perfect. Not bad. Got this one in front of an antique store. Bet you wanted to know that too. 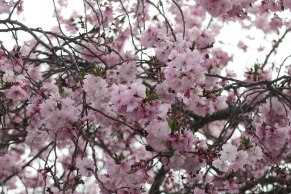 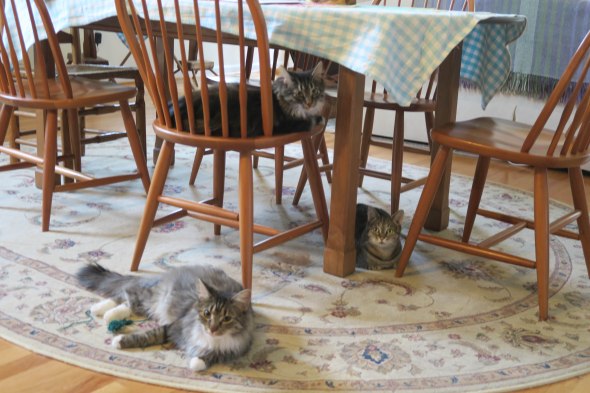 I don’t figure to ever get five in a single picture. Three cats aren’t bad except Elle does not like Spice and Feather. They all tolerate one another now. That’s progress. The boys, Patch and Willow, are larger by far. Whatever they want they do. It’s nice they are mellow. The sisters plot in secret like the Simon and Garfunkel song. 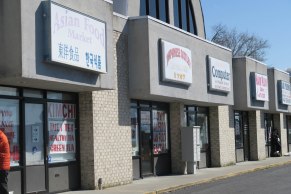 Beat generation, Dylan Thomas, poetry…. We passed an Asian food market. He stood in front of the laundromat. He was not lighting a cigarette. He was playing a harmonica. I did not stick around long enough to listen. He was still playing when we emerged. He was not panhandling for money. The signs poetically rhymed. Ta da!

I end up in fiber stores. Since I am a tech person, there is the choice of humming or finding something else. I like the patterns and color. The manager caught me. She asked me to post to Facebook. Ah! But I don’t Facebook. I’m sort of glad I don’t. 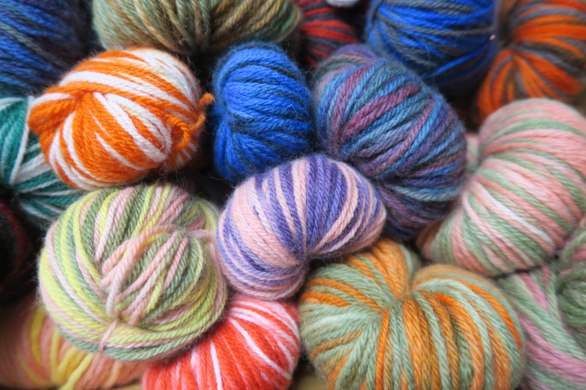 Patterns, close-ups, color, I realize that I am no Instagram or image manipulator. I don’t distort or go black and white. I don’t find it more interesting to dress up my picture. The original should speak for itself. Of course, Photoshop has made digital imaging truly manipulative. What is real anymore? To be sure, we accept manipulation in stride. That would make me old fashioned. Just not too… old.

Don’t laugh. I have a bunch of sewing machines. I have two typewriters. Just two. I got the one just like the one I used to type term papers in college. 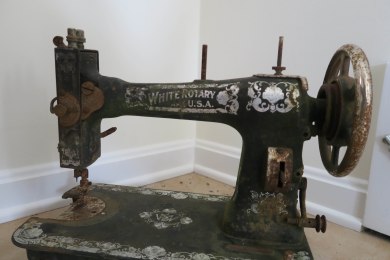 I’m drawn to sewing machines mounted in tables. I’ve zeroed in on one more. (no pic yet) Don’t laugh. We have a house large enough to accommodate all this stuff. I’m building a bookcase to show this stuff. It’s an odd collection obsession. I’m not obsessed.

Big wheels? Not the Mattel tricycle. We have a couple. Ahem! Only two so far. We are trying to get them working. They do work? And now, we are mixing old and new furniture. I wish… but no downsizing around this place.

My kids did pottery in school. That would be lower school – as in around 4th or 5th grade. In fact, we have some of their pieces still around. And, they are about as good as these pieces. I never realized my kids had talent. Sorry, I am simply not an art critic. 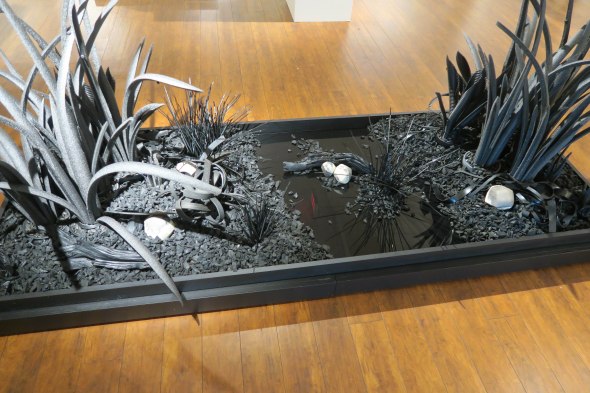 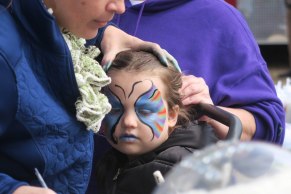 Yeah, I know it’s late. St Pat’s was weeks ago. I’m behind in the queue. I was cautioned that some parents don’t want their kids photographed. Yeah, I forgot. But then again, it is a fact, that on the street, anyone is fair game for being photographed as long as it is not for commercial purpose. There is a fine line in being right and being not PC. No one objected. I got shots of some cute kids. No harm. No foul. I did it all innocently. Really. No agenda.