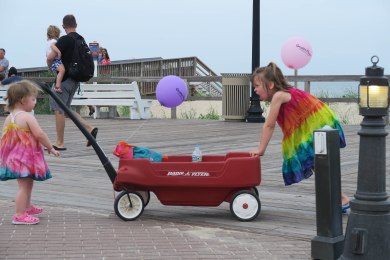 I watched the interaction of these kids. A pair of sisters in the wagon were eating pizza. The three older sisters were with their little brother who played with the little sister in the wagon. The older teens were tickled that brother was playing with a little girl. The teens squealed with delight and peals of laughter. The other little girls interwove their way in and out of the scene unfolding. I tried to guess. By my observation the teens are sisters. There was a total of six kids. It’s a large family. Ah! That reunion? (after the pig encounter) They had ten kids. That is/was a tribe!