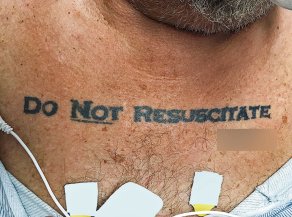 Good news. Dec 5. Our fearless leader decertified 2,000,000 – two million acres – of national park in the name of states rights. Billy Bush said, “Yes he (Trump) said, ‘he (Trump) grabbed pussy.'” DT is out with full support of another fellow molester – Moore. Delicious irony?? Meanwhile TV/broadcast anchors are being fired left and right. Yeah, it’s all fake news! The tax bill will hurt blue states – a neat trick by the Republicans. It’s better than gerrymandering except you can’t gerrymander the presidency or the senate.

And then there are these two pictures. The first was drawn on the homework of a student by his step father a tattoo artist known to make offensive jokes. Look closely! It depicts a school shooting?!!! He was charged with a felony. Stay tuned. What about freedom of speech? What about dead kids? Go figure.

The second tattoo shows up across the collarbone of a patient who arrived in the ER unconscious and in need of medical care. Do NOT resuscitate. Hmmmm… they considered what to do? The signature is blurred in the lower right. Therein lies a debate??!! It’s good that the man arrived and slowly died. The decision was referred to an ethics expert who determined that the patient meant what he had tattooed. Ah! I’m glad an instant decision could be deferred. This was a tough one. What would you do? We rehearse, “what if?’ scenarios all the time. It means that you have a plan “in case of.”

Are you having a good day yet? It’s bright and sunny where I am. I’m in a good place. …but, I won’t say where.

I’ve been to the Hancock Shaker village before. And to my surprise we did not see everything… then and now. But after the most recent visit I came away having seen more than in previous visits. 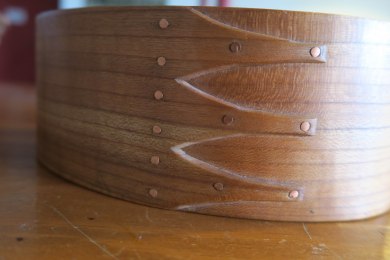 I was lucky enough to strike up a conversation with Ted, who kindly imparted a crash course on making Shaker boxes. I’m educated and hope to start making boxes soon. It was a random act of kindness on Ted’s part. He saw I was interested. He gave me an A-Z lesson with tips that I will try to remember and carry on. The trip? It was a spontaneous 90 degree turn in our itinerary. Typical, unexpected, fruitful, interesting… some of the best things are found and discovered. I’m not too big on planning.