By Elizabeth A. Harris

“In the face of growing pressure to tackle New York City’s widespread school segregation, Mayor Bill de Blasio announced on Saturday a proposal that would change how students are admitted to eight of the city’s specialized high schools, a group of highly sought-after institutions where students gain entry based on a single test.

Black and Hispanic students, who make up 67 percent of the public school population, are grossly underrepresented at the specialized high schools, which include Stuyvesant High School and the Bronx High School of Science.”

It’s another conundrum. The specialized schools are the best in the city? You can’t get a better education in any other high school? It’s a choice. You take a test and then if your score is good enough, you may choose to go. Or not. Level the playing field or dilute the talent. Even in a school like Stuyvesant you have a hierarchy. There was a student (whom I knew) who was number 708 in our class. Is it about status, or about education, or the ability to move with a faster crowd? Talent? Opportunity? Equality. A level playing field you say? I went to Stuyvesant. We were average guys (all male student body then). There was talent. Nobel? Ummm, no, I don’t think so. Better teachers? No! There was more incompetence because with seniority, a teacher could become assigned to Stuyvesant where the students were pre-selected and motivated self learners. Auto pilot! And in many cases we were – left adrift. We were once graded in English by writing our own grade on a piece of paper. Yes, you pick. like strawberries. I don’t know the answer. But, it ain’t easy. And politics should not be a measure of trying to make things better. There are quotas. They exist at Harvard. They existed at my NY state medical school. It’s unspoken. Legislation will always be circumvented. I count myself lucky that I survived education and benefited in spite of it all. Right place right time and darned lucky. At my last glance, Asians dominate the student body. When I attended (’60’s) it was Jewish. The conundrum is how to make a level playing field. Should we mandate that basketball teams have short players too? Or we should truly have overweight beauty contestants? The road to hell is paved with good intentions. 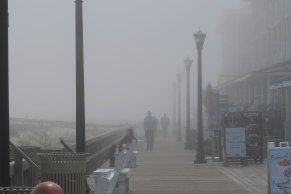 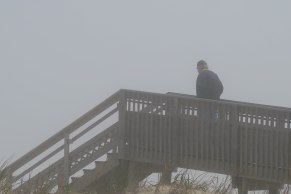 The funny thing is that less than half a mile away on US 1 it was bright and sunny. We went down to say “Hello” to the ocean. I haven’t really realized how much this means to me until now. Thanks.

And there was fog. It’s like London without the crowds. Okay, so don’t fall down laughing. I can’t think of another analogy. But, it’s neat. I’m glad we went.