I’m shy. Yeah, don’t laugh. I don’t ask people to pose. Only occasionally. As in hardly ever at all. Ever! The kids would have a sleepover periodically. This time it was a pool party. It was our habit to make a challenging stack of rafts, climb on top, and then accidentally on purpose fall off. After all it is a pool! Stability was never an issue. But on this one occasion and in this one single shot, I got a keeper. It was hidden away this many years. I don’t think I could have posed it better. Everyone looks good. The composition is good. Wow, I’m better than I think sometimes. 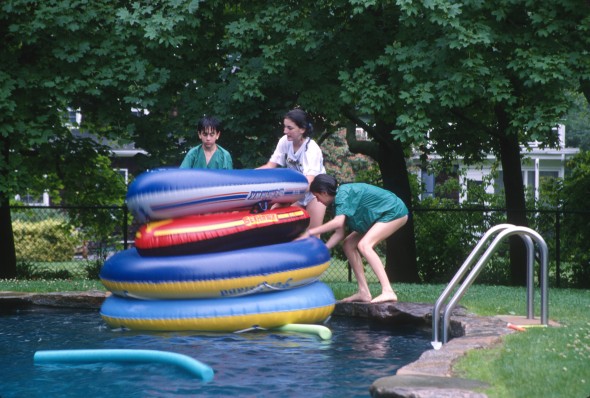 The whole purpose of this exercise is to stay on it. It’s like a bucking bronco. You last for a mere few seconds. More than one cannot coordinate the delicate balancing act… even if you know them like good friends. The splash is worth a thousand laughs for all. 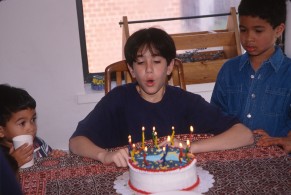 It’s a euphemistic way of discussing death. Back in May 1998 we had a fairly typical family gathering for David’s birthday. The immediate family was close enough (geographically and otherwise) for everyone to come. It’s twenty years later and most everyone who was old then is no longer in this world. The means and methods were varying. As I edited this event I was sobered by the fact that I am old now. It’s like most things. You don’t think about it. But you know life is not infinite. I appreciate each moment as much as I can. I think about the departed, miss them, and hope I will be remembered when I am gone. Remembered fondly would be a plus.

I have a double whammy. I was born here in the USA. My parents immigrated and then changed their names to English names. They picked their own names. Great! But how do you find ancestors when you don’t speak the native language (Chinese) of your forebears and they lived in a different country. I got a free crack at Ancestry.com. I put in my mom. She was one of seven children from Shanghai, China. The last three children were daughters and she was the middle daughter. Fu Ching is the aunt seen here. She was the youngest and kept her Chinese name. No matter, I know where she came from – Shanghai by way of Hong Kong. Inserting my mother’s name, I got a listing that says she arrived in San Francisco around 1947. And my dad arrived in the same port in 1948. He arrived with a woman named Fanny. Ha ha. We have an Aunt Fanny. For real. Not the woman my dad came with. Who was she? Don’t know. That’s a mystery for another story. I’ve told you I don’t know my mom’s age. She lied on my birth certificate. The eldest aunt told her to do so. And what does it matter? At this point in life the fact is a curiosity. I think everyone would like to lie about their age at some point.

History? History – looking back. This was among my first efforts at Photoshop experimentation. There are experts who are light years beyond my expertise. I simply removed the bars of the fence. It’s not too good. But it is enough to fool the viewer (mostly). I’m lazy. These days I don’t do too much image manipulation. Mostly, what comes out of the camera is what I use and post. I have gotten a bit better at preprocessing my image. But, one must know what can be done. It’s part of the toolbox. It’s way better to point and shoot. My laziness comes from my dread of time spent processing in Photoshop. Lightroom? I will ‘develop’ as long as it takes for my attention to wane… not long at all. But then again… everyone has to edit and cull.

Dave started on a bike with training wheels out on Long Island. If I would list the places since that he has ridden – Taiwan, Canada, Mexico, Germany and so on, you might be impressed. He rode cross country – yep – more than 3000 miles – Delaware to LA. It all started here. He first rode with his (training) wheels here. To say that I am proud would be an understatement. Who knew what he would accomplish. I rode as a mean of getting around when I was a kid. I was a reluctant participant in riding as an adult. Then I rode for fitness. I should do so again. I get a good workout without too much wear and tear on the joints. I enjoy knowing that my son has surpassed me. The most I ever made in a day was 96 miles. I just couldn’t find the energy to make it to the “Century.” And yes, that’s Scales and Tails there in the background. Don’t you love the symmetry?

This place has long been out of business. It’s a small seafood and bake shop. The owner’s wife was the baker. She made fresh croissants each morning. And there were chicken pot pies that were heavenly. How heavenly? I still think of them with longing and fondness. Great longing… The crust was an absolute marvel – probably a ton of butter. I’ve been ‘round the country sampling other offerings. No to Bob Evans. There ain’t no chicken pot pie like the one at Scales and Tails. She elevated comfort food to the sublime. I haven’t had one like hers since then. I hope she’s still making them somewhere. 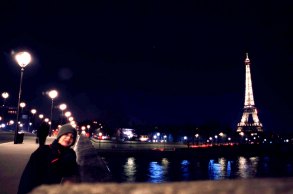 How did I know this image would work? It was Paris and the Eiffel Tower at night. Night shots are devilishly hard. They are surprisingly easy. Lighting is tungsten (mostly). Film is balanced for daylight. Light bulbs throw off enough light that they mimic daylight levels of light. The lighting difference from foreground to background is tough to compensate and balance. It’s still slide film at this point. Digital can handle the situation much more easily. My archive? I was able to locate the original slide I posted before without too much pain. Gee! It’s good/lucky to be organized (somewhat). For most the eye/brain is fooled and compensates for daylight and tungsten differences. But the reality of print leaves a distinct discernible difference. Did any of this make sense? Someone I know keeps asking me this. And… I get it.

I am so fascinated that I got this image. Actually, there are two. The other slide was a wider angle view of this painter at dusk. He was on a bridge (duh) and I was on a tour boat on the Seine. Yes, the lighting was near impossible. And I did not ever see the painting until I developed the slide. Voila! You might think this as an out of focus shot. I’m impressed that I got anything at all. See in the dark digital cameras might well to better now. To me this was a one of a kind image that I had no right to get and I got it by sheer luck. There was some skill. I was there. I pressed the shutter. Hey! I can smile and talk about it all this time later. 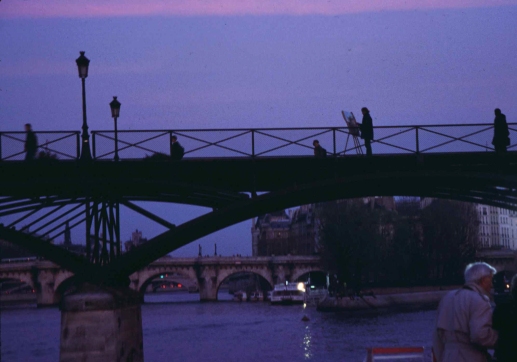 Digital? Now? Yes, this shot would be way easier. And then again it would challenge most people. Not too many people would try it. Even fewer would have noticed this shot. To be honest I had no idea what I would get. Serendipity. 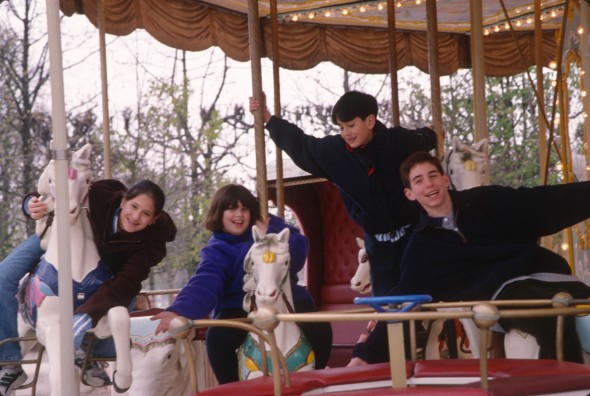 Mix together: kids + carousel = fun. Paris. That’s fun right there! But innocence is so fleeting. It’s an unguarded moment that makes me smile. Not too much more time went by and the oldest kids would be teenagers. I liked them at this age. But, everyone gets old. I’m still thankful that they didn’t have “shooter” drills in school. They do now. Jules teaches. She’s aware that she’s unprotected in her private school. Fortunately, she’s teaching elementary school. Her first job in the Bronx public school presented her with an eight-year old who walked around the class threatening to kill his fellow students. She taught with an arm bar around his neck. That would no play well in Peoria these days. 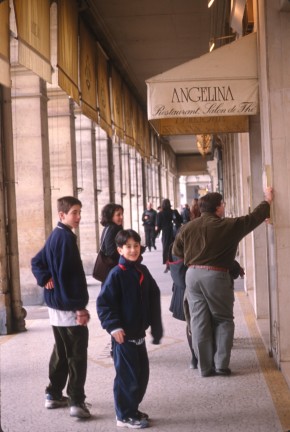 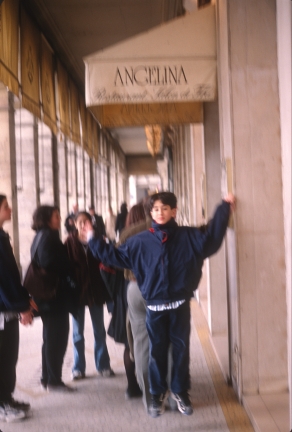 If you’re ever in Paris do stop at Angelina’s. Maybe it’s still there? It was in the guide book. I don’t read guide books. Someone else in our group had this place on the “to do” list. It is the home of the “Mont Blanc.” That would be a meringue cookie over a chestnut cream covered in chocolate or maybe it’s the other way ‘round. But the total package is worth the trip. I still dream about it. There is nothing like it in America. Chestnuts generally are not considered too much except roasted in NYC in the winter in Central Park. I’ve had a connection to chestnuts since I grew up in West Virginia and my mother used them in chestnut stuffing of her own concoction. I still make my stuffing that way. I’ve got the recipe (Mont Blanc) but it’s something you dream about but never get around to making yourself. I shall continue to pine. I hope Angelina is still there.

The second image is an extra. My edit came across the contents of the hotel safe in Paris. What would you keep safe? Stuffed animals and framed prints. Of course! My kids?