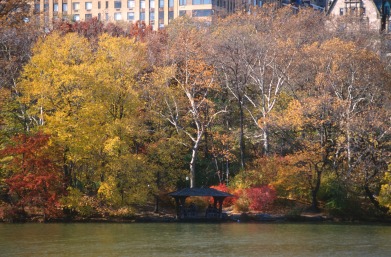 Central Park. Is there any other? In the middle of the “City” amongst a million people, a park was created to preserve open space. When you consider that every other inch is covered with developers scheming to construct a high rise something, it is pretty remarkable that someone didn’t pave over and build on this park. I took the kids to school many days. And in the fall, I could see and gauge the autumn color as it developed. Not enough, but a few times I would venture into the park and get some fall shots. I got lots of leaves in color, but, not so much of the city and park in peak fall foliage. In the midst of it all there is serenity to be found. I didn’t realize how crowded it was. Now I live where there are mere thousands (population). I have to drive for a while to find traffic. A car going by on my street after dark is unusual. The beach is crowded. I might have to cruise for five whole minutes to get a parking spot. I live with someone who worries about parking. She was lucky to see a car near her once a day. Geez! She worries about parking all the time.

This entry was posted on September 2, 2018 by Victor Ho. It was filed under Fall, New York and was tagged with Central Park, Fall.