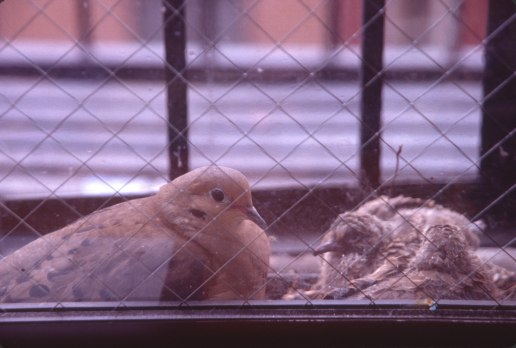 Back in 1994 before I knew what would happen, Jules named a dove who nested in her window box, Amelia. No ready water for plants, the window box had long been abandoned and was facing the street. We had plenty of pigeons. No doves. Amelia was fearless. She seemed to know the glass was protective against the humans on the other side. That little bird hatched clutch after clutch. Maybe it wasn’t the same bird, but, how do you argue with a ten-year old girl? I can only say that multiple births of one or more babies occurred across multiple years. My kids were careful to severely admonish me against scaring or annoying the birds. They stared back at me through the glass and never budged. She merely hatched another brood.

And then one day in August, 2006, the doves had a family reunion on our deck. The multiple generations gathered for that one time and quietly roosted anywhere and everywhere. There were more than twenty? Obviously, they remembered. I never saw them gather again. But on that one day, the doves that met reconnected with a memory of their birthplace. I was lucky enough to be there when it happened. It was an honor. I commend my kids for being so conscientious and caring. There are moments when you are proud of their kind and gentle souls.

Not that anyone will look, but, I posted this idea back in November 2011. Since I scanned my slides once more, I still think that this is a touching story. It bears repeating.

This entry was posted on September 3, 2018 by Victor Ho. It was filed under Birds, New York, Uncategorized and was tagged with Amelia, Birds, Dove, New York.