A pair of barn swallows built a nest beneath the eve of my garage. They were devilishly difficult to photograph. My best effort got their open mouths as mom flitted in for a brief moment. They did not appreciate my presence. I could only get a shot or two. Otherwise the parents stayed away. They were more patient than I. I gave up and left a good image for another day. The kids got to eat in peace.

Baby ospreys? There are a lot of nesting pairs along the road. They perch in high isolated nests. Traffic passes and they don’t seem to mind.

Do not pass go 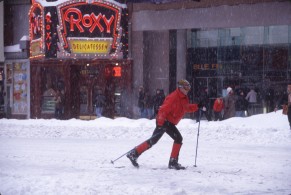 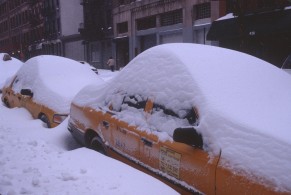 Some days, not many, are a complete “no go.” It’s not often it snows in New York City enough to stop traffic and business. It’s fascinating to watch the usual routine grind to a halt. For a few days things are way different. Then the snow melts and it’s messy dirty. Oh well, there are a lot of people who trudge through the snow. I’ve never not been able to go. I even did a major brain aneurysm operation in the aftermath of a major snowstorm. Ok, I’m not bragging. It’s just that there was never “no go” for me. This past winter changed that. It’s not that I got old and became a wimp. I just couldn’t go. The snow was literally too much for us to drive. We walked. We did not go far. I was lucky. “Retired” means there is no where you actually have to go. Still, it was a strange feeling to be limited. It’ll snow again in NYC. I won’t be there. I won’t go.

Yes. Every big storm brings out someone who thinks it’s cool to cross country ski down the street or in Central Park. It’s a common spectacle now. I actually considered snow shoes or cross country skis after the last winter storm. The bang for your buck is too small.

On a roll (croissant)

I’ve told you about Scale and Tails Market/Deli/Bakery/Seafood. The owner’s wife is the baker. She was great. The place closed years ago. The routine on the weekend was for me to go fetch the paper and croissants. Then the kids would chow down and enjoy(read the comics)! I freely admit the croissants were good! They had a ton of butter. And that automatically is good. I didn’t eat them. I knew better. It was better I didn’t. I was watching calories even way back then. But the joy comes sometimes from watching your kids happily engaged. This slide does it for me. It’s not the picture but all the memories this one brings. Oh?! Ignore the bed head.