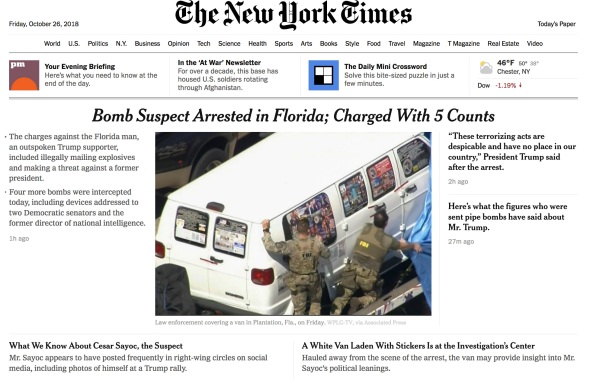 … our fearless leader.  As soon as the bombs were intercepted, there was but a moment’s pause when our fearless leader floated the idea that democrats were behind the plot in order to throw the upcoming election their way. Thanks to the efforts of the the “terrible” FBI and others (“equally incompetent”), a suspect with ties to the right wing and ties to the biggest liar of them all – do you need to be called out by your name trump? He got a pic with you. Yes, a pic with trump not with a democrat. Oh, that’s rich too. You can say he set that up as well. There’s only so many incredulous lies you can tell. Is there anything you won’t turn around and just simply lie about? I hope regular folk are listening. As to those of you who embrace the lies, I am bewildered and saddened.

Read: The vest says FBI. The suspect has posted a pic of himself at a trump rally. 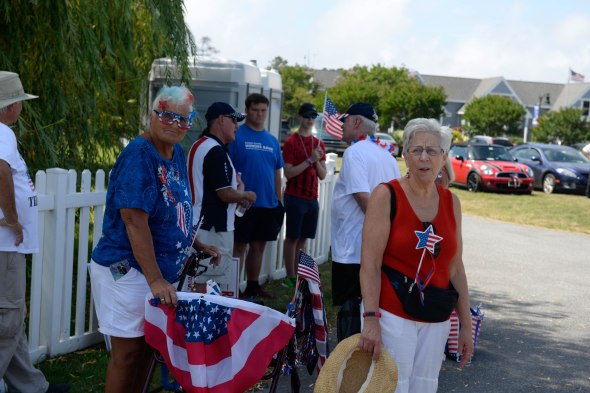 These are faces of hardcore republicans. They were about to march against the democratic candidate in the 4th of July parade.  I’d have loved to have a conversation and try to understand what’s in their head. I think it’s probably better I just kept going once I ascertained their political bent. No one was gonna change their mind on this day or any other. The lies and propaganda continue to assault me as the fearless leader spouts tripe. GIGO (Garbage in, garbage out). In fairness, I think I recognized some of their husbands who demonstrated just before the fateful presidential election. I hurled my desire to grab their… They remain unbowed. Sadly.

I have since talked with one (Republican). She’s says the economy is doing fine. The unemployment is rate is low and more African Americans are working than ever before. The is no solution to gun control. And we must build a “wall.” She watches Fox news. Sadly, it’s all true. It just doesn’t happen to be the way she says. Fake news and truth is not truth…  Sigh…..