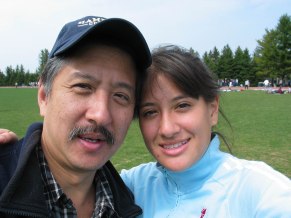 I was gifted a Canon G3 on my birthday in 2003. It would still be a year later I would get my Nikon D70. Too technical? One of the first serviceable shots was a selfie. A few days later I visited Jules at her college track meet. Some of the images were lost and never archived. The metadata was corrupted though my filing method kept track of the date I took the images. The biggest event I did was Amy’s (Susan’s daughter) wedding. I shot film and digital. The camera was highly rated at the time. I just did not utilize it fully. I was still committed to film. In a way I’m impressed at my ability to keep a database and to keep my photos organized.