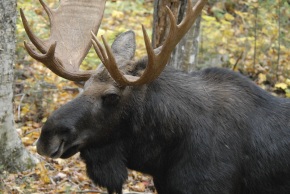 No charm the second time around. I was last in Baxter State park in 2008. Near the end of the day I had the moose encounter of a lifetime. I was (my)  nose to very big  nose (moose). And it was awesome. I knew it was once in a lifetime then. Unfortunately, it has proven correct so far.

We tried once more. The views were spectacular. The closest I got was a moose sign as we left the park. But at almost the same time after we had just left the park… beaver! I stopped to shoot the setting sun over a marsh. 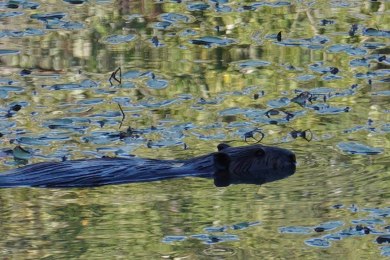 And in the water were two beavers just swimming about. They were unfazed by me or my camera. And voila! Beaver encounter. I realize that they were not particularly photogenic. But at least I had a real wild nature encounter with an animal not usually seen by me in the wild.

This entry was posted on February 11, 2019 by Victor Ho. It was filed under Animal, Maine and was tagged with Animal, Baxter State Park, Beaver, Moose.